HOLMBERG: Small town has big campaign against fat tolls on I-95 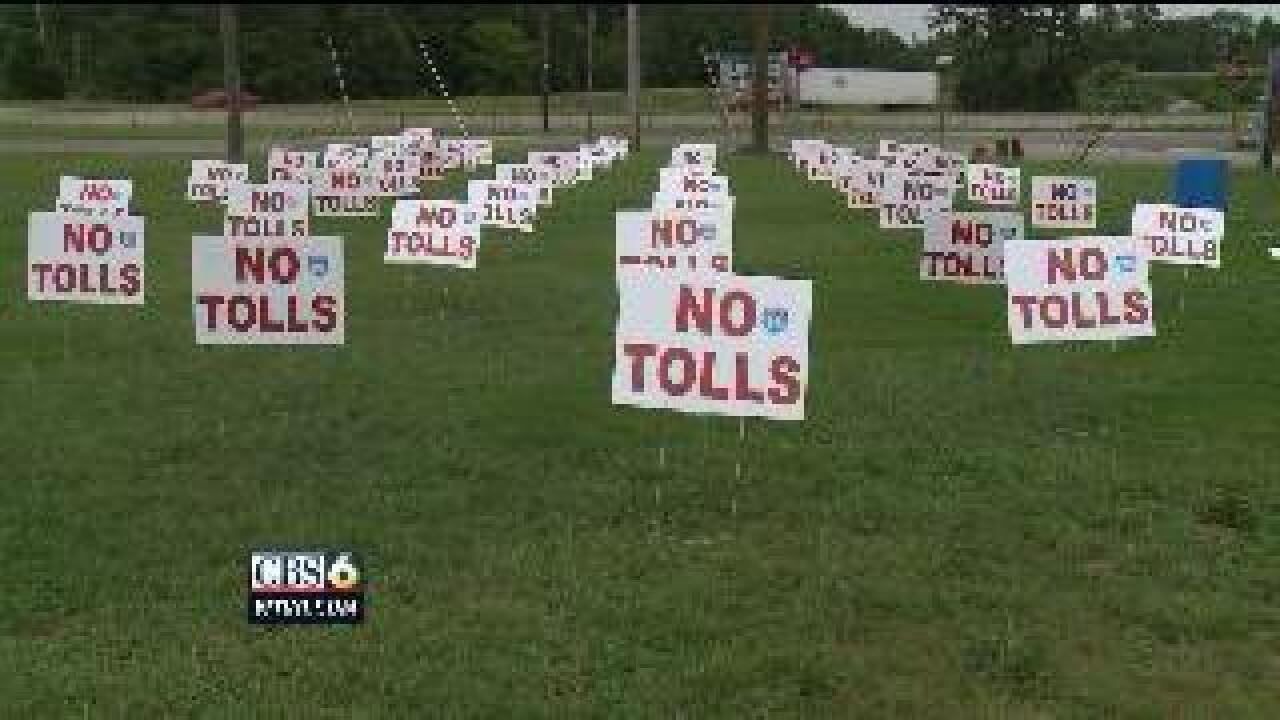 SUSSEX COUNTY, Va. (WTVR) - The town of Stony Creek, 30 miles north of the Carolina border on Interstate 95, is certainly country – population 134 or so.

But town leaders are mounting an ad campaign worthy of Chicago, or the Big Apple.

An ad campaign against a proposal to put a big-time toll just south of their small town.

“They didn’t think there would be any opposition,” said Stony Creek Mayor Frank Jackson. He pointed to a field full of “No Tolls” on 95 signs. “And that’s not the end of it. We’re going to fight it tooth and nail till the last day.”

They’ve made 5,000 signs, and plan to make 5,000 more, to blanket 95 from Petersburg to Emporia. There will be banners for tractor-trailers. The Town Council has passed a resolution to get the governor to reconsider.

Rural Sussex County, one of the very poorest in the state, is the site of proposed tolls for southern Virginia, $4 for cars and $12 for trucks. [RELATED: I-95 toll opposition webiste]

Opponents in this small town believe cars will jump on US Route 301 to escape the tolls “and bottleneck our community,” said town council member Chester Carter.

Carter had a gas station before I-95 was built. Back then there was so much traffic on 301, he said, there were three growth industries.

“And that is the towing business, the morgue and the car dealerships, because we had more wrecks, more people getting killed, because 301 was so congested that people were passing on double-solid lines. They want to re-enact that by putting tolls on 95 that’s going to put people back on 301.”

But not truckers. There’s a weight limit bridge that will keep them from using US Route 301 as a toll dodge. And the exit and entrance tolls in Stony Creek – a proposed six dollars - will keep them away, said Sylvia Jackson, a town council member who also represent independent truckers.

The town’s truck stop is a key source of revenue, along with trucking firms based in or using the town’s resources.

And she said the $12 toll is just another sucker punch for an industry already on the ropes.

Chester Carter says the solution for finding road repair money is simple, a two cent gas tax everyone pays according to usage.

“Nobody is going to get killed,” Carter said. “We don’t have to spend 30 million dollars to build a toll road before we get one dollar. They system is in place.”

This crew is fired up, angry at being targeted for being poor and small and rural.

“We’re just like a bunch of bulldogs,” Mayor Jackson said. “We’re going to hang on, lock our jaws on this and really go at it.”