AURORA, Colo. (KDVR) – ”Dark Knight Rises” star Christian Bale visited the memorial for victims of the Aurora theater shooting on Tuesday, as well as visited with some of the victims of the shootings at the Medical Center of Aurora South.

Bale, and his wife Sibi Blazic arrived and walked around the memorial to honor the 12 people who died Friday morning at the Century 16 Movie Theaters.

Bale also took part in an impromptu prayer circle. One woman said she didn’t immediately recognize Bale until after they had prayed.

“A couple next to me asked me to pray with them,” resident Amanda Tyacke said. “There were about six or seven of us. And then prayer was over, and I was taking some pictures and realized who I was pretty much standing next to was Christian Bale.”

Earlier, shooting victim Carey Rottman posted to his Facebook page a picture of Bale visiting him in his hospital room.

“Wow!!! Thank you so much for the visit Christian!! What a great guy! Still in shock!,” Rottman wrote.

A source at the hospital originally reported that Bale arrived via ambulance around 2 p.m. Bale was actually escorted by Colorado State Patrol in an unmarked SUV organized by the governor’s office.

Media and copy by Meagan Kelleher, Tammy Vigil, and Kim Posey, at KDVR in Colorado. 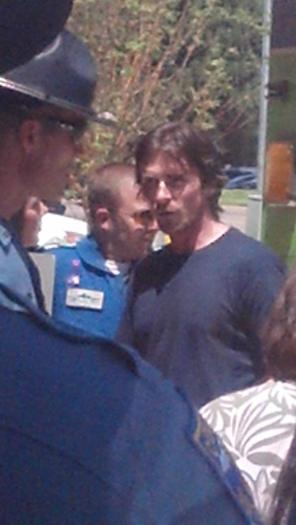