MECHANICSVILLE, Va. (WTVR) - President Obama stopped at Berry's Produce on Chamberlayne Road on his way from Richmond International Airport to a campaign stop in Glen Allen Saturday, according to a White House pool report.

"Let's see what we've got," President Obama said to market owners Bill and Sandra Berry. "I hear the tomatoes are pretty good."

The Berrys gave President Obama a crash course in selecting the best tomatoes, the pool report indicated. The President spoke with some customers at the market, including a conversation with one woman about energy policy.

The President  purchased one bag of fresh tomatoes and a 25-pound box.

Sandra Berry told the pool reporter she was "shocked" when Secret Service contacted her two hours before the President's visit. The Berrys said they are undecided as to who they wiill vote for in the November election. 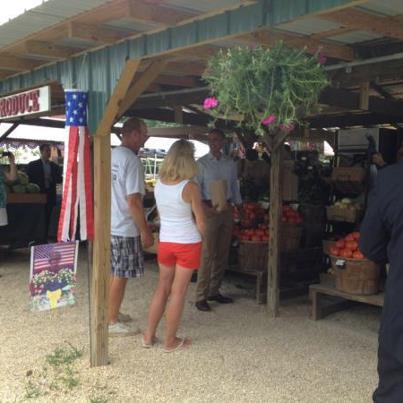