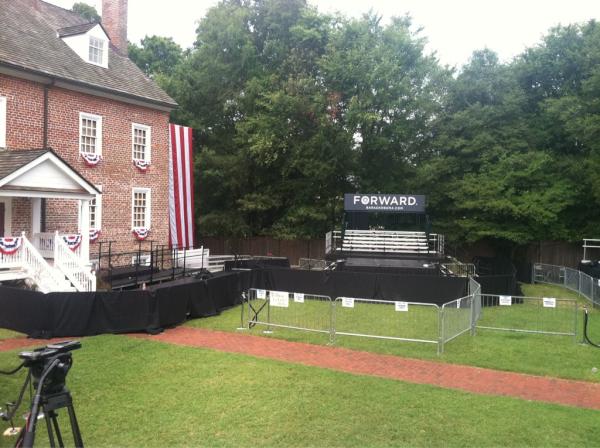 On his way to a campaign event outside the historic Walkerton Tavern in Glen Allen, the president stopped by Berry’s Produce on Chamberlayne Road in Mechanicsville around 11:40. [BONUS: President shocks Mechanicsville market owners here]

Nothing like a stop at Berry's produce for President Obama to kick off a Saturday in Mechanicsville, Virginia. http://t.co/7ylFj4V5—
Jen Psaki (@jrpsaki) July 14, 2012

However, stormy weather pushed up the president’s visit about an hour. He arrived at the tavern around 12:15 for the scheduled 1:20 speech.

Rain poured down on the crowd and even soaked the president. At one point, Obama joked about the dreary conditions.

“I’m wrapping up… Everybody’s wet anyway, so it doesn’t matter. It’s too late. Those hair-dos are all gone,” Obama said as the crowd laughed and cheered. [WATCH: “Obama jokes to crowd ‘Everyone is wet anyway’]

After completing having lunch inside the tavern and completing some interviews, Obama set off for RIC around 2:15. Air Force One took off from just after 2:45.

Folks started lining up for the event in Glen Allen around 7 a.m.

Several roads and interstates were closed during the president's visit. Click here for a list of road closures in Central Virginia.

Lieutenant Governor Bill Bolling, the Virginia State Chairman of Romney's 2012 Presidential Campaign, appeared at Meadow Farm Museum and Crump Park on Mountain Road around 9 a.m. That's about a mile and a half from the Walkerton Tavern.

@LGBillBolling and Mrs. Bolling w/ Romney supporters who stopped to check out the @MittRomney bus this morning. pic.twitter.com/uPSeC8yj

This is the president's sixth visit to the Commonwealth since November.  Obama officially kicked off his 2012 campaign for president at events in Columbus, Ohio and Richmond, Virginia.

In Richmond, thousands turned out to see President Obama and First Lady Michelle Obama at a rally at VCU's Siegel Center in May.

The president launched a two-day campaign swing through Virginia on Friday, telling boisterous crowds that he kept his promise to bring change that helped middle-class families, and now it was time for them to work to re-elect him.

"Because of the values we share, I believe in you." Obama told chanting, cheering supporters in a Virginia Beach school gymnasium.

To rising applause, he continued: "And if you're willing to stand up with me and knock on doors with me, and make phone calls and get out and organize, then we'll finish what we started in 2008."

Obama carried Virginia four years ago, becoming the first Democrat to win the state since 1964, and polls show him with a slight lead over Romney at this point. He emphasized Friday that despite negative ads flooding the airwaves, it is the voters who hold the ultimate power on Election Day. [Depend on CBS 6 News and WTVR.com for complete coverage of Campaign 2012]

Delivering what is becoming his stump speech for the campaign, the president complained about the stalemate in Washington that he blamed on differing visions by each party. He framed the debate as a choice between moving forward with Democratic policies or going backward with Republican calls to return to what he called failed policies of the past.

"I don't want to go backwards. I want to go forward," Obama repeated several times in outlining the differences between what he proposes and what Romney backs.

The Romney campaign reacted immediately, saying Obama policies that have failed to bring down high unemployment and promote growth are what should not be repeated.

"He's right. Why would we try his failed policies again?" said a statement from Romney spokeswoman Amanda Henneberg.

In his most direct criticism of Republicans, Obama admonished the House GOP leadership for holding more than 30 votes on repealing or dismantling his signature health care reform law while refusing to join him in extending tax cuts on income of up to $250,000 for families and $200,000 for individuals.

"All it would take is one vote to make sure that all of you don't see your taxes go up next year," Obama said. "You tell me what would be a better use of time."

Obama's plan would mean higher taxes for 2% of the country who earn more than $250,000 a year, which he argued was necessary to help bring down budget deficits and would cause little discomfort to wealthy people "like me."

Republicans, however, reject any tax hikes in adhering to conservative principles of shrinking government to reduce deficits, as opposed to Obama's call for what he calls a balanced approach that would include further spending cuts and increased tax revenue.

The president headed to Hampton and Roanoke for more speeches Friday, then will return to the White House for the night before two more Virginia events Saturday in Richmond and Chantilly.

Earlier Friday, Virginia Gov. Bob McDonnell told CNN that he believes support for Romney is growing in his state.

"About four months ago, Romney was down eight points," McDonnell said, adding that the more that people examine what he called "the failed leadership and impact of the regulatory policies in Virginia" in comparison to Romney's ideas, "I think it gets better for Romney."

"I won by 18 points after (Obama's 2008 victory in Virginia) and what I'm hearing on the ground from business people and just the independent voter is this jobless record of 41 months over 8% and crushing national debt are the things that are driving people towards Mitt Romney," McDonnell said.

In a sign that Republicans want to shift attention away from the Bain Capital issue, Romney's campaign teased supporters Thursday with news of an upcoming announcement on his choice for a vice presidential nominee.

Romney refused to comment Friday on the vice presidential search.