NEW YORK (CNN) - The American "sport" of competitive eating capped off its signature battle royale in New York on Wednesday with the apparent triumph of two defending champions.

In an event likely to repulse most vegetarians, Chestnut tied his record by scarfing down 68 hot dogs and buns in 10 minutes. It marks the California native's sixth win at the competition, tying his former rival, Japanese eating icon Takeru Kobayashi, who did not compete due to a contract dispute.

Thomas also successfully defended her title, setting a new women's world record after downing 45 hot dogs and buns. That smashed her previous record of 41, which she set last year.

But in a similar showdown in the same New York borough, Kobayashi scarfed down 68.5 hot dogs and buns in the same amount of time in an all-you-can-eat event meant to rival the Nathan's contest.

It's not clear whether the two competitions have similar rules that allow for half counts.

Chestnut and Thomas attended the weigh-in for the Nathan's contest on Tuesday, with Chestnut coming in at 210 pounds and Thomas marking 100 pounds on the scale.

"The Black Widow" used her tried-and-true method to down the dogs.

"My technique is I dunk two hot dogs in the water cup and then eat," she said Tuesday. 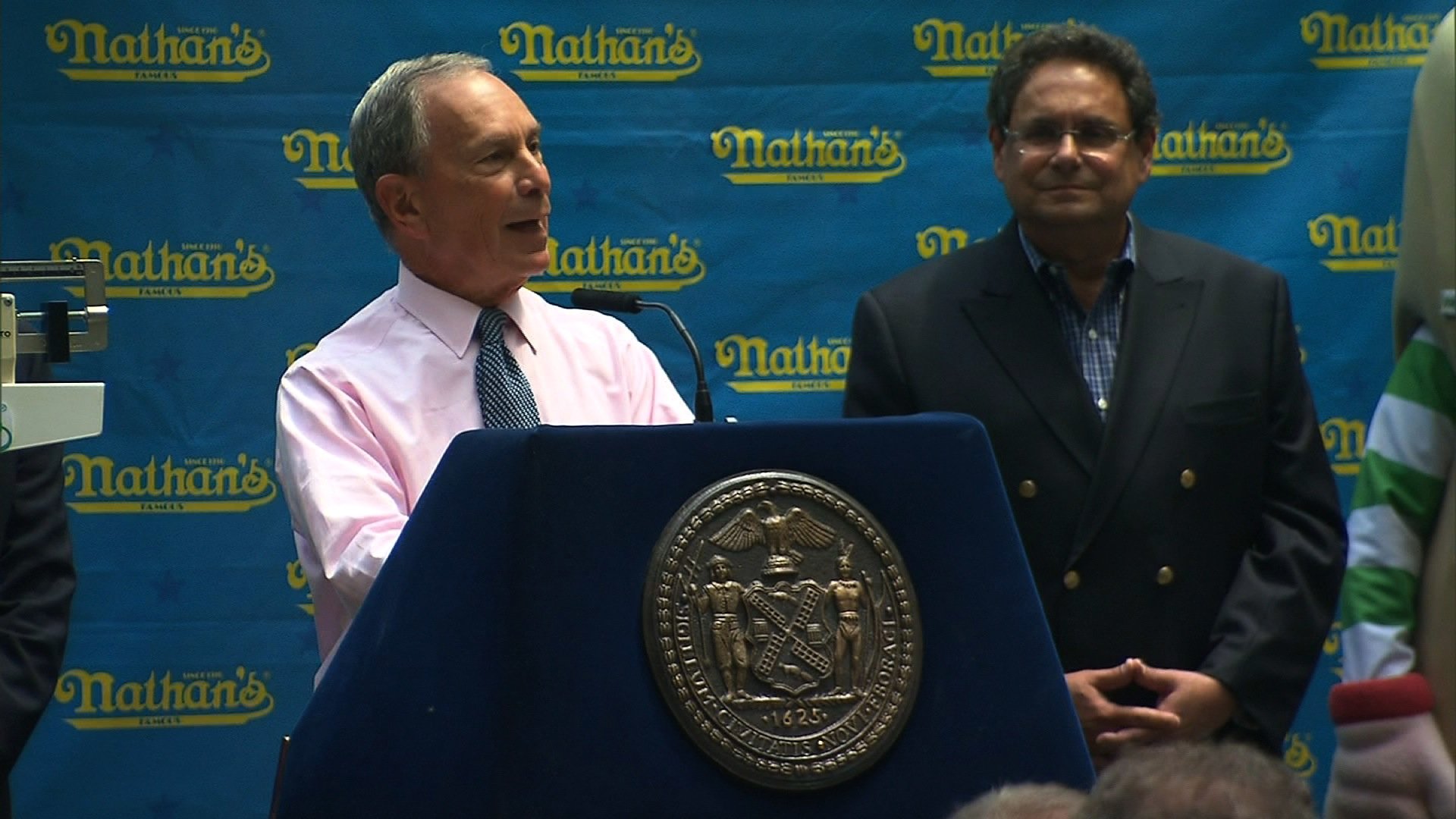 The contest started nearly a century ago as a sideshow on the notorious boardwalk in Coney Island. But all that changed when Nathan's Famous Restaurant saw the draw it had for the boardwalk, and especially the eatery.

Up until last year, men and women held contests together, but now have separate divisions.

"It's an American institution," said George Shea, who along with his brother, Richard Shea, and partner David Baer took competitive eating to a new level.

"America is able to celebrate freedom -- its rights, its freedoms, all of the joys that comes with that -- by eating hot dogs in the most absurd practice ever in mankind's history."

The three introduced the coveted mustard yellow championship belt, arranging for ESPN to telecast the competition live and promoting the "eaters" as professional athletes.

"I have never been more excited, and I'm not just saying that," said Shea. "When I see Joey Chestnut -- he's an American hero, people flock around him. They flock around Sonya. I get goosebumps on my hands and realize the Fourth of July is here."

In past years, Major League Eating hyped up the gastric rivalry between Chestnut and Kobayashi, a serial holder of the mustard yellow belt.

Kobayashi set his first record at his debut Nathan's competition in 2001 by eating 50 hot dogs in 12 minutes. He went on to take home the title through 2006.

In the years since, he hasn't participated because of a contract dispute with Major League Eating, which placed restrictive limits on endorsement and remuneration, his representatives said.

The Japanese eating legend did not want to play along, they said.

In 2010, Kobayashi was arrested when he stormed the stage at the competition. Last year, he contested from afar.

On the roof of a Manhattan bar, Kobayashi polished off 69 hot dogs and buns to the tune of a crowd chanting "Kobi! Kobi!" as the official Nathan's contest played on a television beside him, unofficially beating Chestnut's record.

This year, Kobayashi participated in an event titled Crif Dogs, a newer New York hot dog institution, which started in 2001.

The Crif Dog Classic took place at Roberta's, a restaurant with its own growing reputation in Brooklyn's trendy Bushwick neighborhood.

"You know we have asked Kobi probably two dozen times to come sit ... we have said let's sit, let's figure this out; we owe the world a rematch," Shea said. "He doesn't want to do that, I respect him."

Despite other competitions, he said, no one can challenge Nathan's.

Addressing crowds at the weigh-in Tuesday, New York City Mayor Michael Bloomberg got in the spirit, rattling off a string of hot dog puns -- "dogged," "catch up," "cut the mustard" and "pronounced wiener."

The third-term mayor then quickly offered his frank assessment of the speech, blasting his writers with relish.

"Who wrote this sh**?" Bloomberg asked, sparking a wave of laughter at City hall