RICHMOND, Va. (WTVR) – The singer for Lamb of God, the world-famous, Richmond-based heavy metal band, was arrested this week in Prague in the Czech Republic in connection with the death of a fan two years ago.

Randy Blythe, 41, was detained when Lamb of God went to Prague for their show Thursday night at the Rock Café. He is being investigated for manslaughter for the fatal injury that occurred at their show May 24, 2010 at another venue in Prague, according to Czech news report.

Reportedly, Blythe struck or fought with the fan who had come on stage, and that person later died. [Read the band's response]

The four-time Grammy-nominated band cancelled Thursday’s show in Prague. There’s no mention on the band’s social sites about the status of Friday’s show in Leipzig, Germany.

Lamb Of God’s publicist, Adrenaline PR, stated to a music publication that Randy was "wrongly accused, lawyers are dealing with it, and we expect him to be fully exonerated."

Randy’s brother, Mark Blythe, told CBS-6 that he’s awaiting further details and said the charge is “bogus and outrageous and will be dropped immediately.”

Lamb of God has been a top metal band for well over a decade, frequently appearing on the covers of heavy music magazines. 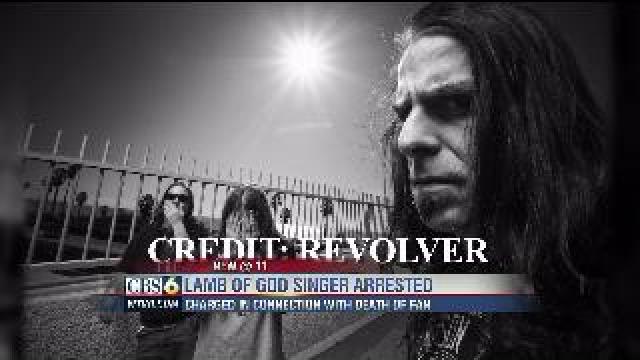 L.O.G. is one of Richmond’s best-known musical exports.

“Yup, practiced right here,” said Dean “Iggy Plop” Owen outside of a vast building where many Richmond bands have practice spaces. “Richmond home boys. Started here. Still here.” He, like others practicing at the building Thursday night, are wishing the best for their friend.

It appears Blythe was still in custody Thursday afternoon, EST.

Lamb of God plays high-energy music. Fans slam dance, or “mosh,” and crowd surf. L.O.G. is famous for popularizing the so-called “Wall of Death,” in which vast crowds split into two groups and then charge each other like a battle in the movie “Braveheart.”

After the 2010 incident, those who know the band heard the intruder may have been struck with a microphone before the security team forced him from the stage.

For years, Blythe was known for his heavy drinking and sometimes erratic behavior. His drunken fight with a bandmate was included on Lamb of God’s “Killadelphia” DVD. But he stopped drinking completely more than two years ago and many who know him are quite proud of his turnaround.

Richmond is known around the world for its high-energy music scene. Videos of other local bands popular around the world – including thrashers Municipal Waste and hardcore heroes Down To Nothing – show how chaotic these shows can get.

Eight years ago, the worst happened. A crazed fan leapt on stage in Ohio and fatally shot legendary guitarist Dimebag Darrell, who is best remembered for his playing with Pantera.

Longtime Richmond musician Greta Brinkman, currently in Druglord, said things can get out of hand quickly.

“Being in a band onstage can be extremely chaotic, real anarchistic,” Brinkman said. “People get excited and throw things . . . and I could easily see how someone could fall and get hurt. You know, anything can happen.

“I want Randy to know that all of us around here wish him the best,” she added. “Fingers crossed.”