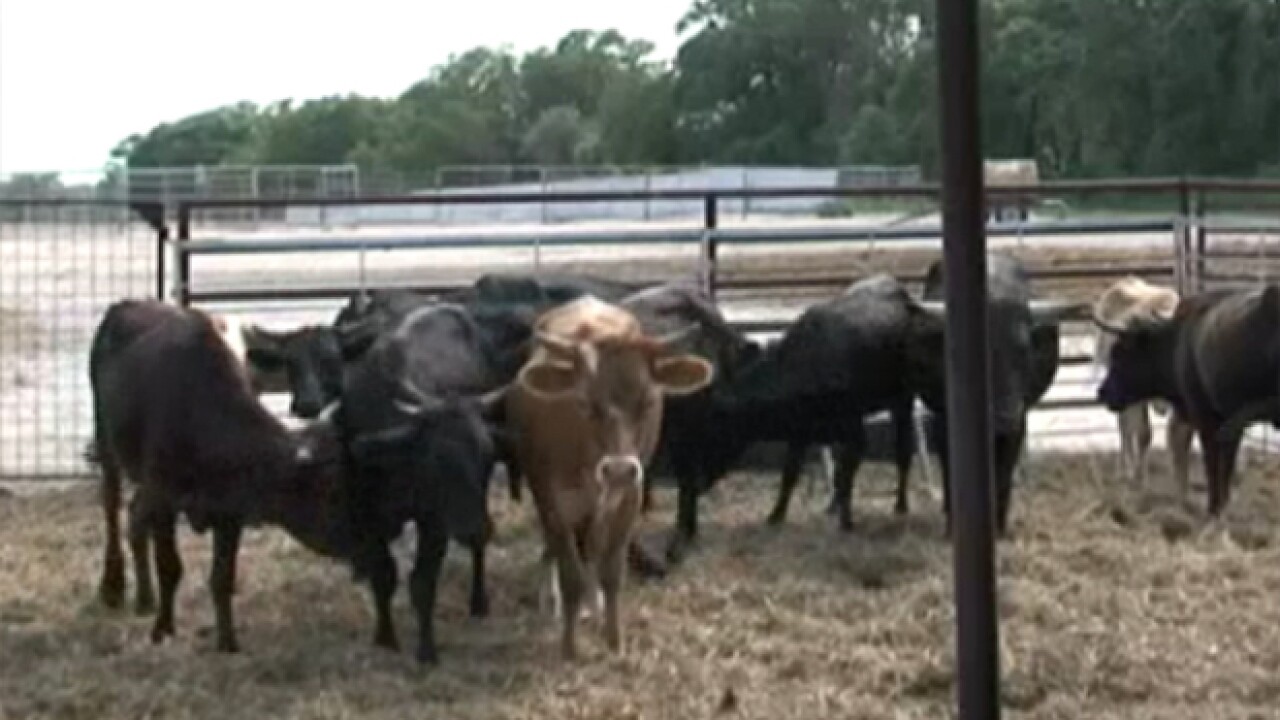 A cattle ranch in Elgin, Texas., where 15 head succumbed to death by cyanide poisoning after eating genetically-modified grass. (KEYE)

(CBS News) ELGIN, Texas – A mysterious mass death of a herd of cattle has prompted a federal investigation in Central Texas.

Preliminary test results are blaming the deaths on the grass the cows were eating when they got sick, reports CBS Station KEYE.

The cows dropped dead several weeks ago on an 80-acre ranch owned by Jerry Abel in Elgin, just east of Austin.

Abel says he’s been using the fields for cattle grazing and hay for 15 years. “A lot of leaf, it’s good grass, tested high for protein – it should have been perfect,” he told KEYE correspondent Lisa Leigh Kelly.

The grass is a genetically-modified form of Bermuda known as Tifton 85 which has been growing here for 15 years, feeding Abel’s 18 head of Corriente cattle. Corriente are used for team roping because of their small size and horns.

“When we opened that gate to that fresh grass, they were all very anxious to get to that,” said Abel.

Three weeks ago, the cattle had just been turned out to enjoy the fresh grass, when something went terribly wrong.

“When our trainer first heard the bellowing, he thought our pregnant heifer may be having a calf or something,” said Abel. “But when he got down here, virtually all of the steers and heifers were on the ground. Some were already dead, and the others were already in convulsions.”

“That was very traumatic to see, because there was nothing you could do, obviously, they were dying,” said Abel.

Preliminary tests revealed the Tifton 85 grass, which has been here for years, had suddenly started producing cyanide gas, poisoning the cattle.

“Coming off the drought that we had the last two years … we’re concerned it was a combination of events that led us to this,” Dr. Gary Warner, an Elgin veterinarian and cattle specialist who conducted the 15 necropsies, told Kelly.

What is more worrisome: Other farmers have tested their Tifton 85 grass, and several in Bastrop County have found their fields are also toxic with cyanide. However, no other cattle have died.

Scientists at the U.S. Department of Agriculture are dissecting the grass to determine if there might have been some strange, unexpected mutation.

Until it can be determined why this grass suddenly began producing cyanide, Abel is keep his livestock far away.

“The grasshoppers are enjoying it now,” he said.