The multi-vehicle wreck involved two tractor-trailers and three other vehicles,  closed all lanes on Route 460 (east and west) between Route 156 (Prince George Drive) and Queen Street.

An officer said the two semi drivers died in the wreck. Four other people were taken to the hospital.

Prince George Police Chief Ed Frankenstein said on Twitter that the accident on Route 460 was "the worst he has seen in quite some time."

The accident happened right in front of Disputanta Animal Hospital, and workers told CBS 6 that they feared for their lives.

Sarah Faulkner said that she and her coworkers heard a huge explosion while they were working. She looked out the clinic's front window and spotted two semi trucks heading eastbound. One of the trucks, which was on its side and engulfed in flames, was sliding down the highway.

Faulkner said that one of the truck's gas tanks, which had come loose and was on fire, skittered across the clinic's parking lot, leaking fuel.

"And, one explosion occurred one after another, and when we looked passed the flames, there was another vehicle on its side," said Faulkner.

Faulkner said patrons from the animal clinic, along with their dog, were inside one of the vehicles involved in the wreck.

"Their dog was ejected from the vehicle," said Faulkner. "Our office manager went out to the road and rescued the dog."

The dog is ok, but Faulkner said the two people trapped inside the vehicle had to be rescued by emergency crews before being taken to the hospital.

Prince George County Fire and EMS Director Brad Owens said the clinic workers helped pull other accident victims out of their cars. He plans to submit their names to the county to recognize their heroic efforts.

The workers, who called 911 and ran outside to help, said it took emergency crews about 10 minutes to arrive. 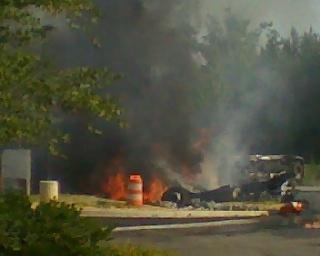 Covil tweeted the accident happened near the Disputanta Animal Hospital and that Route 460 will be shut down in that area for several hours.

#PrinceGeorgeVa - Accident near Disputanta Animal Hospital. Rt 460 will be shut down several hours.

Prince George Police Chief Ed Frankenstein said the 460 accident is "the worst he has seen in quite some time."

No damage reported to site of construction of new PG Animal Services Center following 460 crash, but debris landed as far as on the roof.

The accident remains under investigation.