Many times when a city is going downhill it is not an achievement.  But with the infant mortality rate decreasing by double digits, it gave reason to celebrate Wednesday.  Richmond Mayor Dwight Jones and a panel of medical experts announced the River City has made significant steps in saving the lives of the city's most vulnerable population.

"Richmond will continue to be a leader in reducing infant mortality," said Mayor Jones.

"There are 13 more babies last year that celebrated their first birthday," said Dr. Karen Remley with the Virginia Department of Health Commission.

Medical experts say there are several contributing factors linked to the progress.  There are fewer extreme premature babies.  Additionally there were no cases of SIDS (Sudden Infant Death Syndrome), in Richmond in 2011.  And finally officials said the decrease in the number of teen pregnancies played a part in the reduction of infant deaths.

Patricia Mills, a program coordinator for teen moms said the improvement with infant care has been a community-wide effort.

"It takes a village," said Mills.  "Because it takes many programs, many factors, many resources, community people, it is definitely, definitely a village."

"While some things are cyclical, other things are intentional and I believe your work is intentional," said Mayor Jones.  "The celebration we have today is a result of your intentionality to make these numbers move and to make sure we have better birth outcomes."

In 2001 there were 58 infant deaths in Richmond, a decade later the number has been reduced to 25. 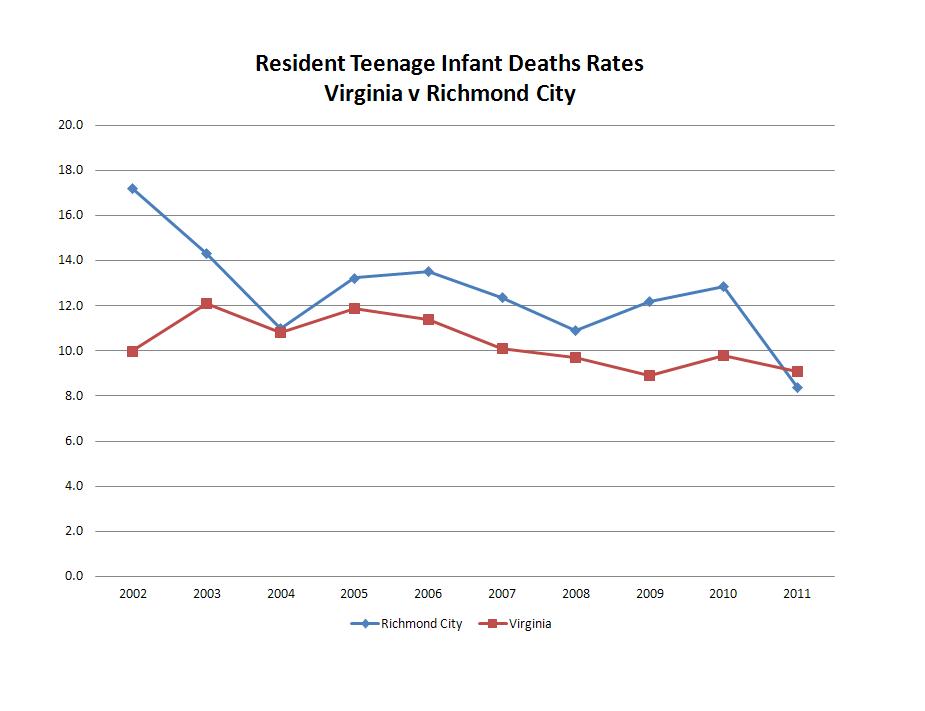