Five must-sees for an aviation geek

The other day, somebody asked me which five aviation destinations I’d like to check off my bucket list. Like millions of others, I’ve already hit some of the must-see stunners: the Smithsonian Air and Space Museum and Pensacola’s Naval Aviation Museum, Ohio’s National Museum of the USAF and Patriot’s Point in Charleston, South Carolina.

Here’s the thing — We get to see, and sometimes touch, historic artifacts that were designed to move at blazing fast speeds. For most of us, It’s the closest we can come to catching a lightning bolt.

Some of the most complicated and formerly top secret machines ever imagined have become monuments to motion in communities across America. The places where these machines were born and pushed to their limits have become hallowed ground. How can you not want to check them out?

How can you NOT want to sit inside the supersonic airliner that made the last flight of the Concorde? Or see the spy plane dubbed the world’s fastest “air-breathing” production aircraft? Or fly over the “boneyard” where military aircraft go to die? Or hang out where the “Right Stuff” flyboys risked death to break the sound barrier?

Hmmm … this all doesn’t sound too geeky. Does it? 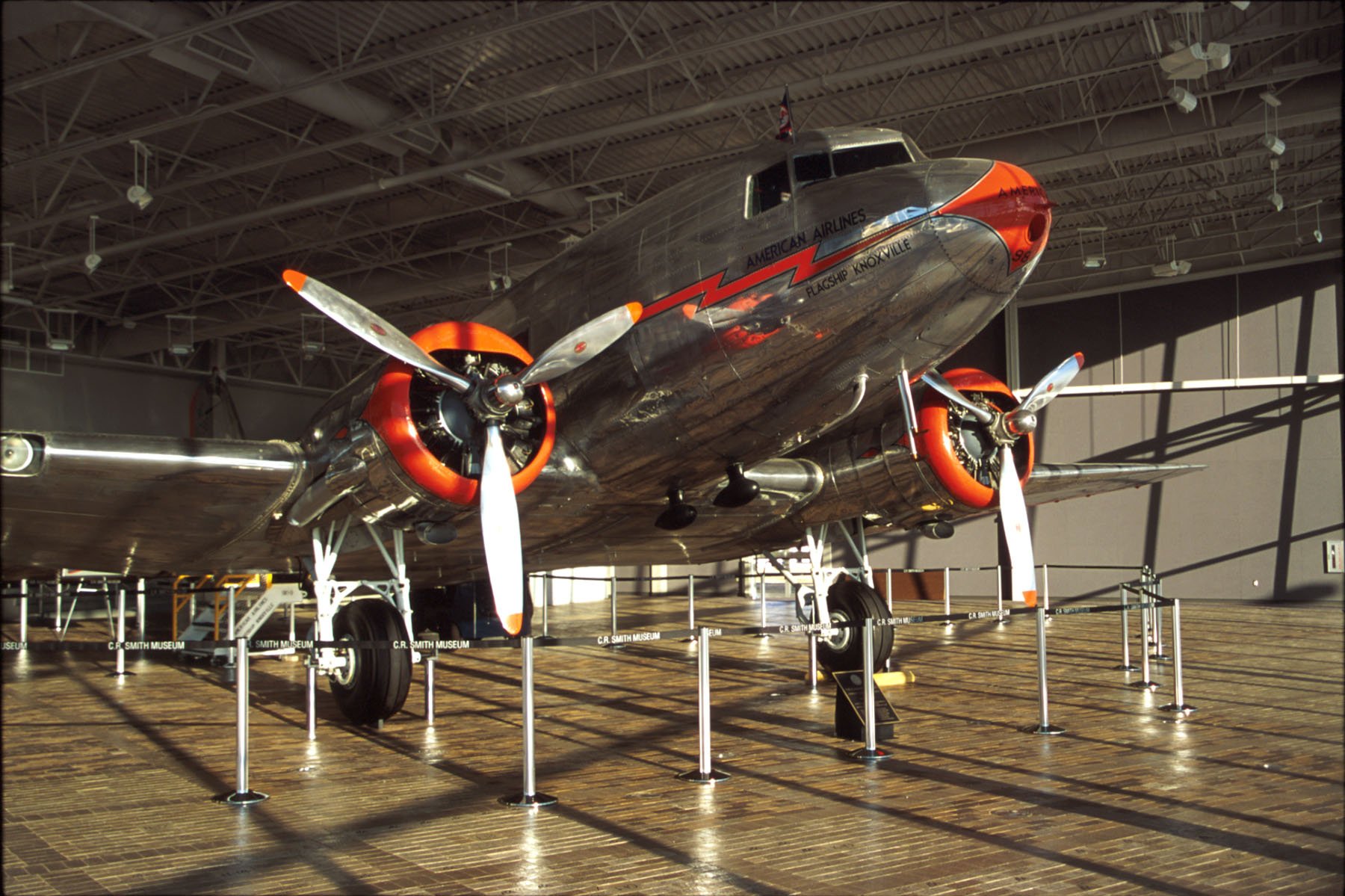 For the record, I’m offering three possible signs you may be an aviation geek:

1. The photo snap. When I’m at the airport waiting to board, I often will snap a photo of my airliner through the gate window. I still don’t know exactly why I do that. Maybe it’s because every aircraft is unique. They come off the assembly line after years — sometimes decades — of painstaking research and development. Then, each one gets a tracking number and is closely followed throughout its career. There are apps and websites dedicated to tracking commercial airliners. Here’s one that tracks aircraft flown by Delta Air Lines and dozens of other carriers.

2. ID please. When I board a plane, I look at the ID information engraved inside the aircraft door. Often times, etched into that metal plate, is the aircraft model and its date of birth. Great, now I know how old my plane is. Essential information. Oops, I’m holding up the line to board because I’m staring at the edge of the door. Sorry.

That’s not really that geeky. Is it?

3. Watch ‘n’ gawk. Finally, don’t tell anybody, but I’ve been known to visit small airports just to watch planes take off and land. This kind of behavior might be considered unusual, especially among those working in law enforcement.

And now for the five must-sees:

One place I’ve been meaning to get to for a while now is Edwards Air Force Base in California. The region around Edwards is kind of a magnet for aviation geeks. Some folks call it America’s aerospace capital. In the high desert about an hour’s drive north of Los Angeles, the area is packed full of aviation history.

It’s a world punctuated by the occasional sonic boom, where some of America’s most sophisticated and secret aircraft were developed including the stealthy F-117 Nighthawk, the F-104 Starfighter and the spy planes U-2 Dragon Lady and SR-71 Blackbird.

But most of all, the skies over Edwards became a deadly crucible that forged test-pilot greats such as Chuck Yeager.

For the few who don’t know, Yeager’s the first human to fly above Mach 1, the speed of sound.

“We’d been working our tail off on the airplane,” Yeager told me during a phone interview. “When we did get it above Mach 1, obviously it made us very happy because we’d done something the rest of the world had been trying to do for years.”

But Yeager and his team were ordered to keep the news quiet. Don’t celebrate, they were told. It’s classified. After the word leaked, “we started to celebrate somewhat,” enjoying good times at a local test pilot watering hole. The Happy Bottom Riding Club and its owner, a woman stunt pilot named Pancho Barnes, gained fame in the film “The Right Stuff.”

Six decades later, the celebrating continues at Happy Bottom — at least at what’s left of it. Destroyed by fire long ago, Yeager showed up at the building’s ruins recently for an annual party thrown by locals to honor Pancho and the Cold War test pilots.

“They fix it all up and get some platforms and have a barbecue and most of the base comes out,” Yeager said. “You go out there and you look at the swimming pool and you think back over the years and you think about Pancho and her husband, Mac McKendry, and some of the people who used to come out there. When I was flying the X-1, I was only getting $260 a month. The way we looked at it, duty was our guideline. That’s the way we all flew in the military.”

Visitors at Edwards are not allowed access to the Happy Bottom ruins, a base spokesman said. But free tours of other areas of the base are available — by appointment only — twice a month. Highlights include the Air Force Flight Test Center Museum, the food court and gift shop at the NASA Dryden Flight Research Center and a “windshield tour” near the flight line where F-16s, KC-135s, F-22s, F-35s, B-1s or C-17s might be visible, said the spokesman.

The Air Force Flight Test Center Museum features a full size replica of Yeager’s plane (the real one hangs in the Smithsonian) and actual aircraft that made the region famous. In nearby Palmdale, locally developed and tested aviation gems can be found at The Joe Davies Heritage Airpark.

Then there’s the dream factory of aviation geeks: Skunk Works. It’s the official nickname of Lockheed Martin’s Advanced Development Programs. Entire books have been written about this facility, which gave birth to the Blackbird and other historic aircraft. Nowadays, behind Skunk Works’ highly secure perimeter, engineers reportedly are working on the aviation wonders of tomorrow, including a lightweight cargo plane called the X-55A and a bizarre, blimp-like airship called the P-791 Hybrid Air Vehicle, which has special technology that allows it to take off and land just about anywhere.

No public tours are available, but aerospace blogger Steve Harris posted some juicy details about his private visit to Skunk Works. For those who can’t get in, Harris told me he only got to see “about 15 or 20 percent of what they could show us. Everything else is something that we don’t even know exists.” Outside the property, you can see Skunk Works’ “big, giant, white, box-of-a-building” easily. The Skunk Works small gift shop is open to the public about a mile or so down the road.

Next, I’d have to travel from the birthplace of aviation icons to the place where they go to die.

That would be a hunk of desert near Tucson, Arizona, known as “The Boneyard.”

It’s sort of like a classic-car junkyard where all the town gearheads want to hang out and pull parts for their customized vehicles.

Access to this place is restricted, but nearby Pima Air & Space Museum offers tours of the Boneyard and — for geeks with deep pockets — several companies at Tucson’s airport sell scenic Boneyard flyovers, says Chris Slack, who runs Boneyard website amarcExperience.com.

Geek bonus: The Boneyard served as a scene location for the 2009 film “Transformers: Revenge of the Fallen.”

Seattle’s Museum of Flight has some real beauties, including a unique Blackbird variant called the M-21. This particular Blackbird was able to launch unpiloted drones that were used for independent intelligence gathering.

Geek trivia: Although it was developed in the 1960s, the Blackbird still holds the record as the fastest “air-breathing” jet plane in history with a velocity more than 2,100 mph, three times the speed of sound. Wanna sit in the cockpit? Museum of Flight has a mockup, which is about as close as it comes.

What else does the Museum of Flight have? Something for aviation geeks AND politics geeks: a Boeing 707-200 that served as the first jet-powered Air Force One.

This is kinda cool: parked outside the museum is the last supersonic Concorde jetliner to make a commercial flight.

It’s really not that geeky — OK? This thing is the world’s fastest jetliner for God’s sake.

We’re talking about cruise speeds above 1,000 mph, compared with regular airliners, like Boeing’s new 787, that poke along at under 600 mph.

Here’s something a suspected aviation geek could do during a quick layover at Dallas-Fort Worth International: check out a painstakingly restored 72-year-old DC-3 airliner.

The Flagship Knoxville, the shiny silver centerpiece of American Airlines’ C.R. Smith Museum, is about a 10-minute cab ride south of DFW. As everyone who’s boarded one knows, the DC-3 is a tail-dragger.

The plane’s tail is designed to sit on the ground, so when you step aboard the aircraft you find yourself on a steep incline. It reminds you how far commercial aviation has come. Meal carts? Nah, not for DC-3 “stewardesses.” They carried meal trays one-by-one to each of the plane’s 21 passengers. That must have been fun during turbulence.

This place features World War I and II-era aircraft, and its website says it’s the only attraction in the world that offers daily aerial demonstrations.

For a price, pilots will take passengers for short flights on vintage aircraft. Not daring enough? For daredevils, a pilot will take you up in a Boeing Stearman PT-17, which has duel controls. The pilot will let you take the controls and fly the plane.