MEMPHIS, TN — Facebook is apologizing to a Tennessee mother who was reportedly temporarily banned from the popular social networking site after posting photos of her baby born with a rare birth defect.

Heather Walker told Action News 5 she was temporarily banned for posting photos of her son, Grayson.

Grayson was born with Anencephaly, a rare neural tube birth defect in which babies are born without parts of the brain and skull. Photos of Grayson were flagged as “offensive” and removed by Facebook.

In protest, Walker continued to post photos of her son, who died only eight hours after being born in February.

After her story originally aired on Action News 5, Facebook apologized for removing the photos:

“Upon investigation, we concluded the photo does not violate our guidelines and was removed in error,” Facebook said in a written statement. “Facebook is a place where almost a billion people share more than 300 million photos a day. Our dedicated Users Operations Team reviews millions of pieces of this content a day to help keep Facebook safe for all ages. Our policies are enforced by a team of reviewers in several offices across the globe. This team looks at hundreds of thousands of reports every week, and as you might expect, occasionally, we make a mistake and remove a piece of content we shouldn’t have. We extend our deepest condolences to the family and we sincerely apologize for any inconvenience.” 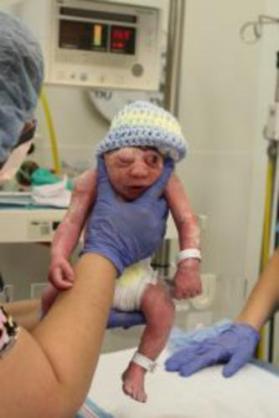 According to Facebook’s community standards page, there are nine types of content that may be deemed offensive and removed:

As of Monday, Heather’s Facebook page is active again and the picture of Grayson which was deemed ‘graphic’ has not been removed.

In a statement obtained by the Daily Mail, a spokesman for Facebook denied that Heather was ever banned from the site, and said, “On rare occasions, a photo reported to us may be too graphic too be permitted on the site. In these cases, the person who posted the photo is contacted, and the photos are removed.  We strive to fit the needs of a diverse community while respecting everyone’s interest in sharing content that is important to them.”

“It is important to note that any photos that are removed – whether inappropriately or in accordance with our policies – are only done so after being brought to our attention by other Facebook users who report them as violations, and when such reports are subsequently reviewed by Facebook,” the Facebook spokesman told the Daily Mail.

Amazed at the amount of support she’s received from all over the country, Walker says the photo is raising awareness.

“Just in two days, all these people have messaged me telling me how much God has used Grayson’s life to touch them and to work in their hearts and to make them appreciate the children they have, that they have healthy children,” she told Action News 5.