By Amber Shiflett and Carliss Hardy (Special to WTVR.com)

RICHMOND, Va. – For its 25th anniversary, the Virginia Communications Hall of Fame inducted one of its largest classes on Thursday evening. It honored 14 inductees for their significant contributions to the field of mass communications, including Politico White House correspondent Mike Allen, former Virginian Pilot managing editor James Raper, and CRT/tanaka executive Michael Whitlock. [Click here to view the entire list]

The rapid change in today’s communications industry was the main topic among the more than 200 guests at the John Marshall Hotel.

“Because it was a slower process I think we did better work,” said former CBS anchor Roger Mudd, who moderated the event sponsored by VCU’s School of Mass Communications. “You didn’t have the deadlines pushing you all the time, because the guy next to you was 10 seconds ahead of you. That does not make you a good journalist,” added Mudd, who was one of the first Hall of Fame inductees in 1986. 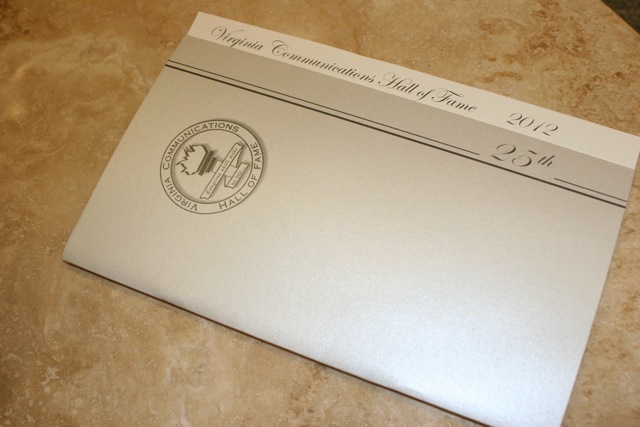 But inductee Mike Allen is working in exactly that kind of fast-pace reporting environment at Politico in Washington. Dubbed by the New York Times as “the man the White House wakes up to,” Allen said that “what hasn’t changed is our desire to tell stories, to tell people what’s happening.”

While reporting methods have changed, Allen said that “the big mission of journalism hasn’t changed.” Allen, who previously worked for the Richmond Times-Dispatch and Time, also stressed the importance of loyalty in the workplace to succeed in the journalism industry.

As Politico’s White House correspondent, Allen feels the upcoming presidential election is significant for journalists because either candidate can win the race.

“It’s probably going to be close and even though one candidate or another might go up in the polls,” he said. “I think most reporters would tell you President Obama has an edge, maybe even a notable edge.”

Allen thanked the people who gave him the opportunities to pursue his career. He said without those people giving him a chance, he wouldn’t be where he is today.

One of those mentors is Allen’s former Washington and Lee University professor Hampden Smith, who was also inducted into the Hall of Fame. Smith has worked at several Virginia newspapers and has been a professor for more than 40 years. He has also traveled the world, teaching journalism ethics in places like Russia and Bulgaria.

Judy Turk, a professor at VCU’s School of Mass Communications, who has coordinated the event for the past 10 years, said that the “Hall of Fame is a very appropriate way to recognize the contributions to excellence in mass communications that these superstars have made.”

Another one of the “superstars” is James Raper, former managing editor of the Virginian Pilot. As the founding editor of Monarch, the campus magazine at Old Dominion University, Raper stressed the use of social media to get information out quickly to audiences. “Twitter is a way to understand where students are coming from,” he said.

One final word of advice to aspiring communicators came from inductee Michael Whitlock, executive vice president of the public relations firm CRT/tanaka. His recommendation was simply to “be curious.”

Margie Fisher, a pioneer for women’s rights as journalists, was also inducted into the Hall of Fame posthumously. Her son Michael Fisher accepted the award on her behalf. “I really appreciate the recognition for her work,” he said. “She definitely helped break the glass ceiling.”

June Nicholson, a former colleague of Fisher’s and a VCU journalism professor, described her as a role model and one of the best statehouse journalists that Virginia has ever had.

A plaque displaying the names of all 140 Virginia Communications Hall of Fame inductees since 1986 will soon be placed in the VCU School of Mass Communications.