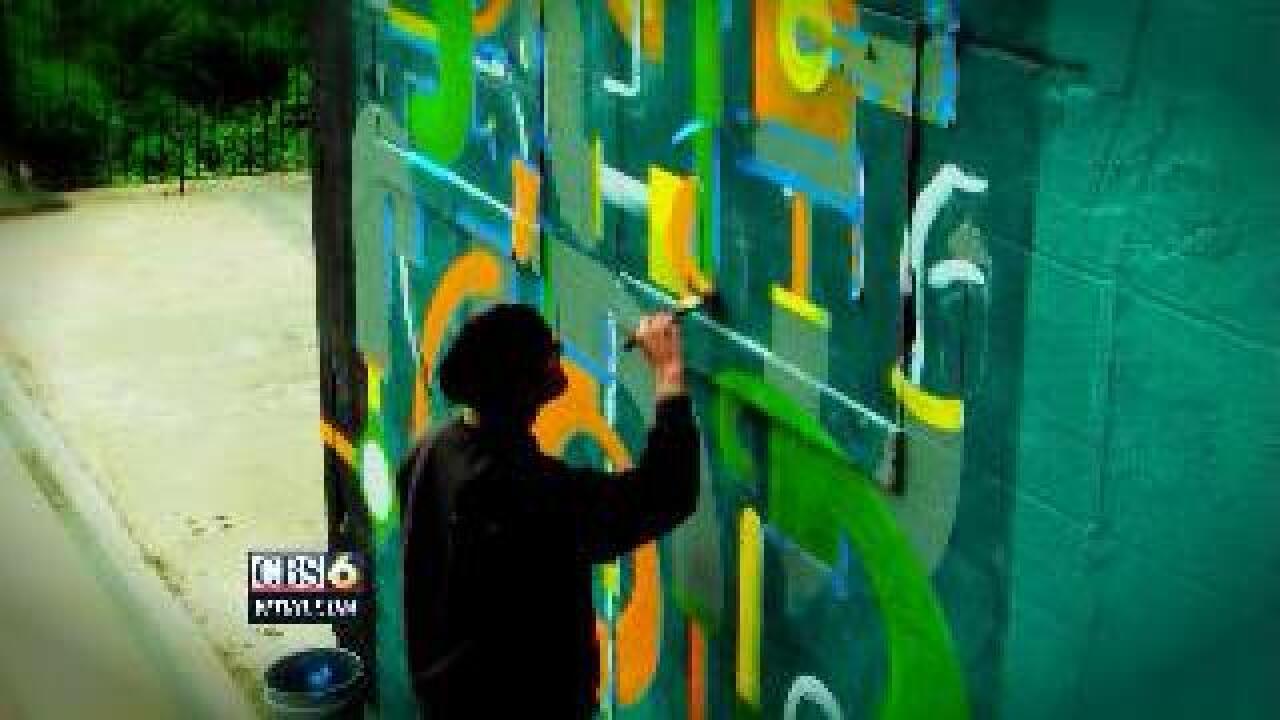 RICHMOND, Va (WTVR)- Graffiti has long been in dirty word in Richmond.

But now, as the River City increasingly embraces its artistic side, a new festival this weekend centered at 12th and Byrd Streets will showcase some of most respected street artists as they transform a huge and historic building during the first RVA Street Art Festival.

There will be wine trucks and even a  team of local lawyers present, not to defend the taggers, but to help them paint.

Friday through Sunday  street artists will tag and paint the city’s old and massive hydroelectric plant – a work of art in itself looming between the river and the canal.

Wednesday afternoon, one of the organizers, respected muralist and musician Ed Trask, brought a U-Haul trailer filled with spray paint to the scene.

“The artists that are coming to use this are unbelievable,” Trask said. “The whole idea of what graffiti is completely changes when you see these guys in action.”

This new festival is part of the city’s shift towards its creative side, something other cities have used as a draw for years, if not for generations.

“We have an amazing university here,” Trask said. “One of the greatest art schools, and so many talented people here that, finally, people are open to see this.”

Chris Milk Hulburt is one of the artists. He’s responsible for a huge, high, wall section. But he’s going to have plenty of help.

“Starting Friday morning I’m going to have 90 lawyers and insurance agents climbing up on the scaffolding and helping me paint my painting.”  They will be working in shifts of 30 or so, he said.

Bob Newcomb, with the Troutman Sanders law firm, isn’t an artist and never secretly dreamed of tagging a building.

“Not at all, actually,” Newcomb said. “As it was explained to me, it’s a paint-by-numbers, and we’re going for it.”

But Hulburt said the lawyers and insurance agents will be encouraged to color outside of the lines - to add their own vision of the vast panorama of the city.

“Every brush stroke is important here,” he said. “Just take your time and smell the roses a little bit and just feel what it’s like to be outside, painting  beautiful colors onto a wall. It feels good!”

Trask said the process of getting the festival up and going is a testament to the city’s commitment to marketing its creativity. As soon as Jon Baliles floated the idea, Trask said, he approached some of the city’s movers and shakers. Right away, he said, Venture Richmond and Altria jumped on board.

“We had to go through a lot of hoops and stuff to have this done,” Trask said. “From Venture Richmond, the riverfront committee, to lot of different people. But they were all unbelievably receptive. And they were easy to deal with. Yeah- it’s a great thing! It freaked me out . . .  I think the city’s ready for a change, and the people are ready for a change.”

As one of the street artists said as he worked on one of the walls, “It’s about time.”

There will be wine trucks and other refreshments.

This, along with Art 180, the G-40 art experience and murals going up around town, paint a picture of a different, hipper Richmond..