By Samra Khawaja and Manhatten Royal (Special to WTVR.com)

RICHMOND, Va. – Social media entrepreneur David Karp is full of praise for Richmond’s tech community and the diversity here. In an interview for WTVR.com, the founder and CEO of the rapidly growing microblogging platform Tumblr said that he sees even further expansion of his local community support service team on the horizon, which just moved into a larger office last month [LINK: Tumblr grows rapidly, moves to larger Richmond office]

“We are trying to hire a real diversity of people,” said Karp, who laid out his company’s strategy when he delivered the annual Turpin Lecture to 200 guests at VCU’s School of Mass Communications on Tuesday evening. The diverse talent Richmond offers helps Tumblr to manage the community support for its international expansion and to serve international users who speak different languages.

“Today we have about a dozen languages we offer native language support for. Right now all of that served from Richmond,” Karp said. “You e-mail Tumblr in Japanese asking for help with a bookmarklet, you get a response usually within minutes in Japanese from a native Japanese in Richmond, Virginia.”

While Tumblr’s headquarters are located in New York, the community support service is located in the Old Manchester District, just south of downtown Richmond. Currently, the Richmond office has 30 employees, many of which came to the event at VCU on Tuesday to hear their 25-year-old boss lay out the vision for the company. 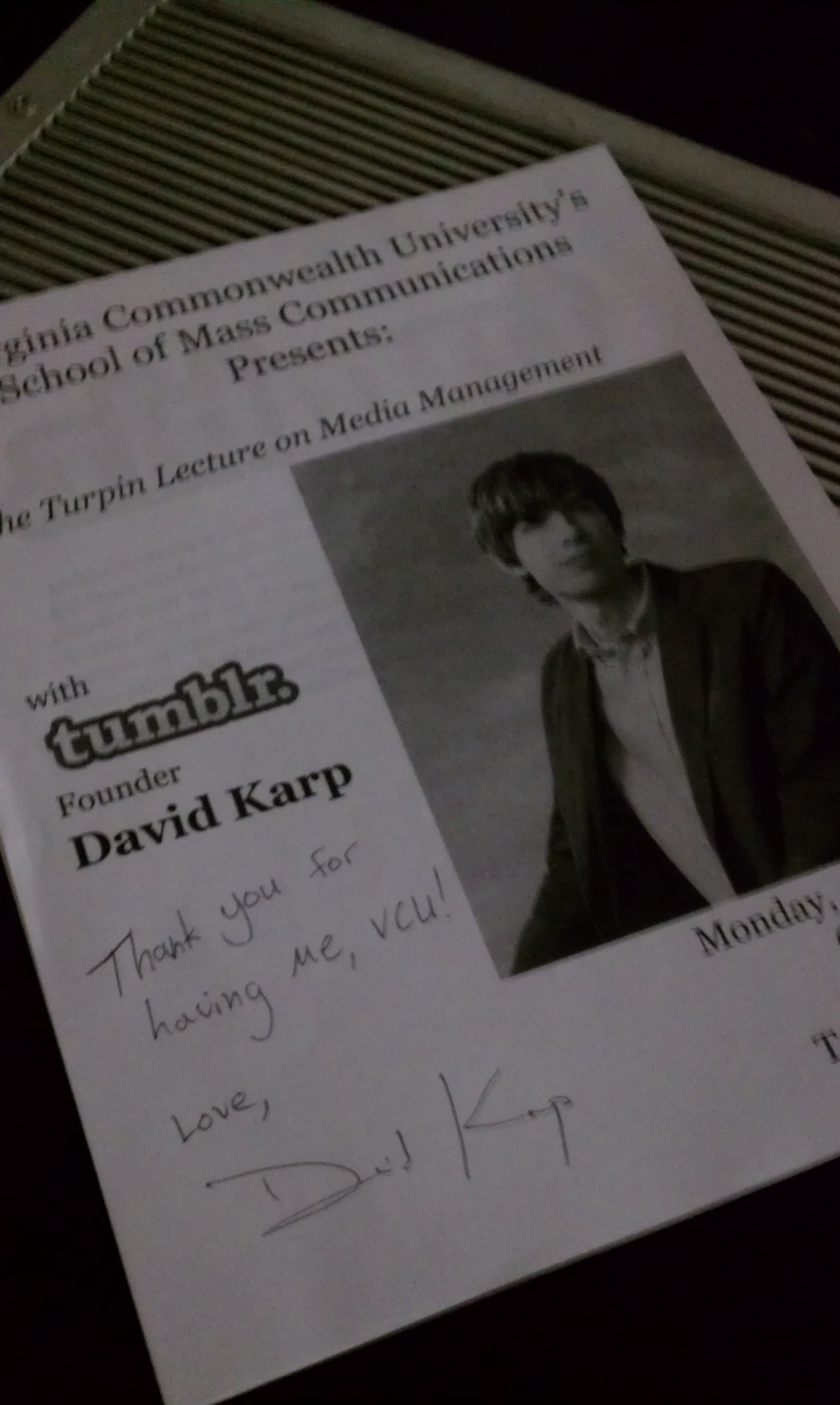 “We’ve had so much luck finding those talented people to kind of match all those criteria across the board here,” Karp said. “We’re so grateful to set up a hub here.”

Located close to the VCU campus, many students who have graduated from there now work for the company.

“I feel very honored to have been a VCU alumna and now to be working for Tumblr. It’s great to show up to this event to see so many people support what we’re doing,” said Tumblr employee Kristin Vamenta.

Karp’s Tumblr team was also initially comprised of young employees, but Karp said that as the company got bigger, it balanced its staff out in order to create a more diverse team.

“We wanted to round out the background experience of people on our team, so that we get more people who’ve seen more things to help us through all the stuff I haven’t seen yet or the other Tumblr’s haven’t seen yet,” Karp said.

Easily being mistaken as a college student himself, wearing a plaid shirt, a hoodie and a pair of jeans, Karp captured his VCU audience with a personal overview on his career, from dropping out of high school at age 15 to founding Tumblr at 19 and the rapid growth and multimillion dollar investments of venture capital in recent months.

Chris Mohney, editor-in- chief at Tumblr, said events like this one give Karp a chance to interact with Tumblr enthusiasts. Since many of the Tumblr users are young people, this type of interaction is most valuable to Karp.

“Most people anticipate his Q&A and I think he does too, because there’s certainly value in giving this long perspective on the company,” Mohney said. Karp’s personable attitude got the crowd’s attention throughout the event and as he wrapped up the evening, he said his favorite feature on Tumblr was having the ability to look at things from another person’s eyes.

For Karp, the creative end of Tumblr feeds him energy and excitement to build his “technology hub,” but when the Stop Online Piracy Act (SOPA) and Protect IP Act (PIPA) bills threatened the expressive website earlier this year, Karp saw the website getting a lot of attention.

“A lot of people were making great awareness of SOPA and PIPA,” said Karp. “We did the best we could and I think our efforts were novel and inspired some other people to take more novel approaches.”

It was Karp’s novel idea to build Tumblr that led him to become a nominee for TIME magazine’s Most Influential People. Yet Karp doesn’t believe he deserves to be on that list.

“There are a lot of stupid lucky things that got me from one step to another,” Karp said.

At the same time, Karp admits that he has had great mentors to guide him through his success and is privileged to be doing what he is doing.

“Getting to build things that hundreds of millions of people are using is incredible and is something that we do not take for granted,” Karp said.