Yesterday two Scots and one handmade Morgan roadster pulled into the River City, as a special stop along their traveling road show.

The Balvenie Ambassadors, Andrew Weir and Nicholas Pollacchi, were here to showcase the craftsmanship of Kevin Baker, also known as The Bon Air Craftsman.

Baker was nominated to The Balvenie Rare Craft Roadshow for his creative work, which includes acclaimed carpentry, along with bow and arrowhead design.

“This has been spectacular to see, someone who can take a piece of a tree and effectively create something that can hunt,” said Pollachi. “What is beautiful about this is that nothing goes to waste…everything from start to finish is used.” 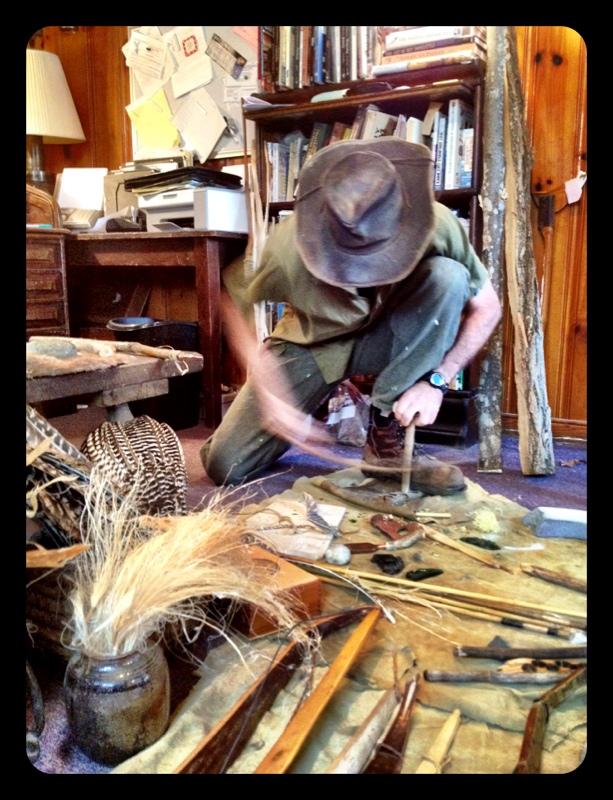 Hand tools are essential to Baker’s creative process. He makes his own bows, and the arrowheads are crafted from glass bottles.

Each arrow is completed by adding feathers from animals that he hunts.

This is exactly what the Balvenie ambassador’s want–people with the same dedication to their own craft as Balvenie gives to a bottle of single-malt.

Last year the duo zoomed around across America in Morgan, known as Mary Rose, and visited 52 artisans.

Weir and Pollacchi document a wide range of handmade crafts, from glassblowers to blacksmiths and carpenters to chocolatiers—the common denominator is enthusiasm and a preservation of traditional crafts.

Baker gave them some archery lessons and started a fire for them—in his living room–with nothing but sticks and friction.

“The handcrafted, old-school stuff is going by the wayside…it’s being forgotten,” said Baker. “It’s nice that these guys are showcasing the true craftsman in this country, and keeping those skills alive.”

Bakes said he began making his own weapons because he was bored with firearms, and wanted something more challenging.

“Different appreciation than just running out there and buying something off the shelves.”

Baker is also known in the area for his work with elementary school children.