ETTRICK, Va. (WTVR) - Hundreds of students rallied at Virginia State University to call for justice in the shooting death of Trayvon Martin.

Martin was fatally shot Feb. 26 while walking to the house of his father's fiancee in Sanford, Florida after a trip to a convenience store. George Zimmerman, a neighborhood watch leader, said he shot the teen in self-defense.

Zimmerman has not been arrested.  Public outrage over the shooting and police response reverberated well beyond Sanford, a racially mixed Orlando suburb.

Students started gathering around 9 a.m. Thursday at the campus fountain, growing to nearly 200 within the hour. They were joined by faculty and alumni, many carrying signs and photographs of the teen, who had just run out to grab a snack.

"We have to fight for justice," said Shade Smith, a VSU sophomore who helped organize the rally. "He was an innocent boy with a bright future. All he wanted was an iced tea and a pack of skittles. If we don't stand up for him, who will?"

"We are calling for students and citizens; white, black, whatever you may be, to stand up for humanity." said Yah Kim Yisray, a VSU senior who also helped organize the event. "

"We see what happens and we know that justice needs to be served, so we had to come out...," said Lawrence Totimeh, another VSU senior.

Thursday evening a candlelight vigil is being planned at Richmond’s African Burial Ground in Shockoe Bottom. 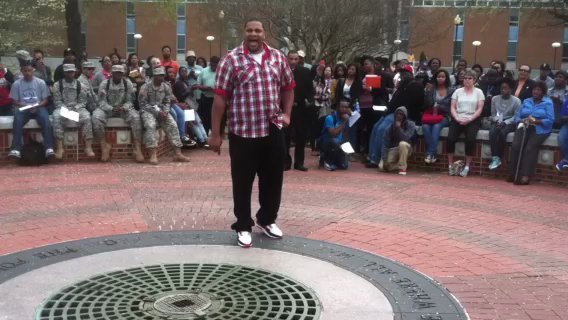