The bill, which would require women to undergo an ultrasound prior to having an abortion, was passed by the House of Delegates last week by a vote of 63-35. The Virginia Senate also approved the measure by a vote of 21-19. [Read the bill]

Governor McDonnell had said he would sign the bill into law once it passed both the Senate and the House of Delegates.

McDonnell said in a news release that the issue of abortion raises passionate feelings among Virginians.

"While debates in the legislature over the decades may seem to indicate there is no common ground to be found on this issue, I believe that areas of agreement can and do exist.  Most agree that a woman’s decision to seek an abortion is difficult, irreversible and life-altering," said McDonnell. [BONUS: Read McDonnell's full statement on the controversial law]

"I consider it important to embrace a culture of life in our Commonwealth, and to protect the life and liberty of all of our citizens," McDonnell also said.

The original version of the bill required any woman early in pregnancy seeking an abortion first be required by law to receive a transvaginal ultrasound to determine gestation age.

However, after pressure from Virginia Governor Bob McDonnell, the bill was amended to require women have a less invasive external abdominal ultrasound instead.

The bill was further amended to exclude abortions performed in cases of rape or incest.

Thirty people were arrested and charged with trespassing by Virginia State Police in riot gear. However, after the crowd started dispersing and police pulled back from the scene after the arrests around 3 p.m.

"Governor McDonnell, kill the bill," some protesters yelled through a megaphone as they marched around the capitol.  [UNCUT VIDEO: Protesters march around Va. State Capitol] 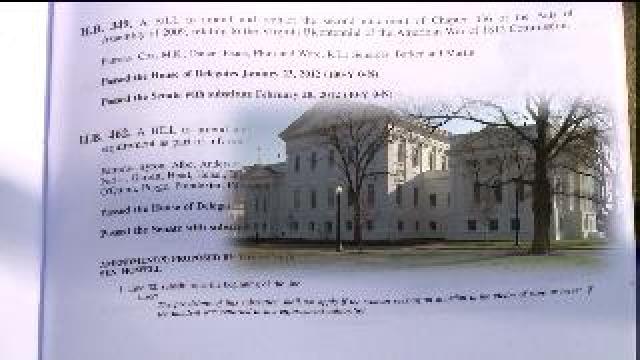