RICHMOND, Va. (WTVR) - Hundreds showed up at the Virginia State Capitol Saturday to protest after the Virginia Senate and House of Delegates passed the so-called ultrasound-abortion bill earlier this week.

CBS 6 News' Sandra Jones said 30 people were arrested and charged with trespassing by Virginia State Police in riot gear. Jones said after 3 p.m. the crowd started dispersing and police pulled back from the scene.

"Governor McDonnell, kill the bill," some protesters yelled through a megaphone as they marched around the capitol.  [UNCUT VIDEO: Protesters march around Va. State Capitol]

Governor McDonnell said he would sign the bill into law once it passed both the Senate and the House of Delegates. The governor’s spokesperson said that McDonnell has seven days to act upon it upon receiving it.

Group is marching around the State Capitol. They are planning to chant and then have a moment of silence.

The original version of the bill required any woman seeking an abortion first be required by law to receive a transvaginal ultrasound to determine gestation age.

However, after pressure from Virginia Governor Bob McDonnell, the bill was amended to require women have a less invasive external abdominal ultrasound instead.

The bill was further amended to exclude abortions performed in cases of rape or incest. 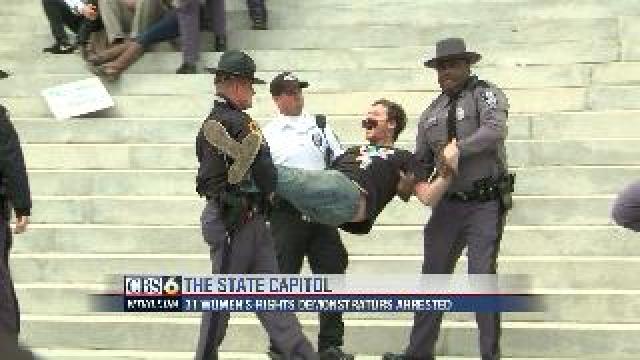