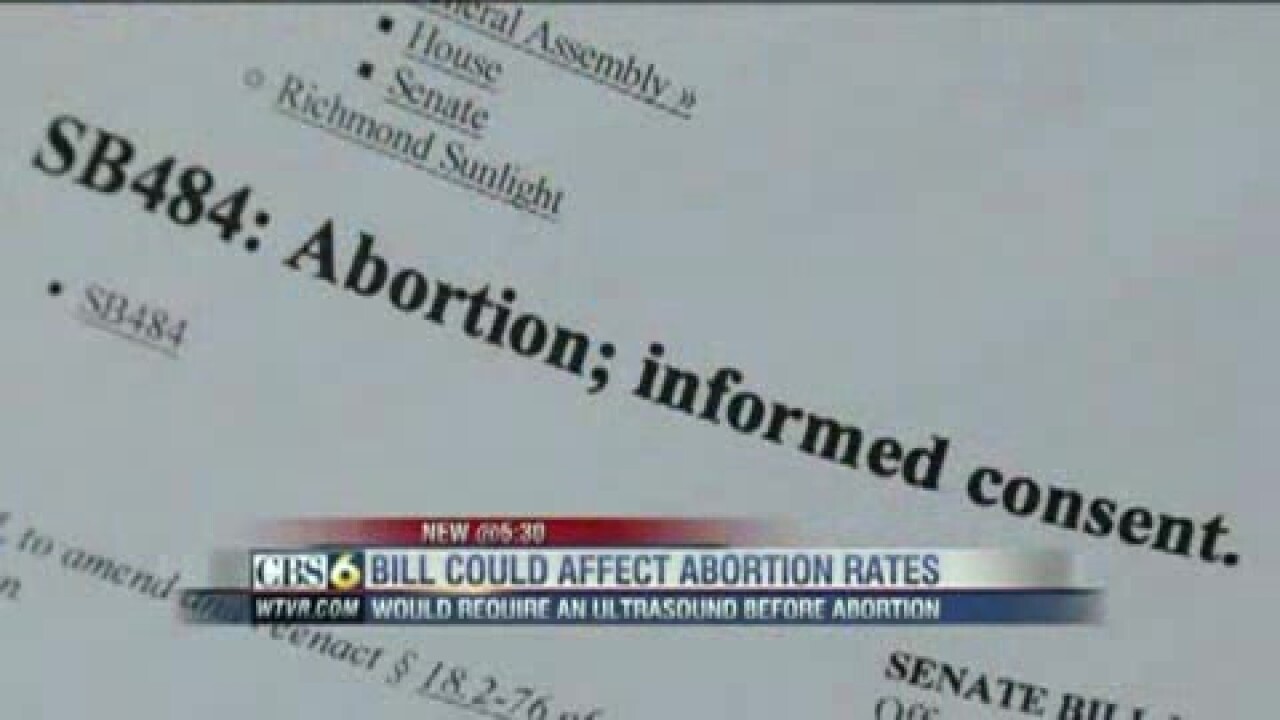 RICHMOND, Va. (WTVR) - Few subjects churn out passion and debate in Virginia's General Assembly quite as effectively as the topic of abortion rights.

Given that backdrop, Virginia could be in for some high theater this session.

Senator Jill Vogel, R-Winchester, calls her legislation, Senate Bill 484, something that's "not new to most people," but a measure that could gain some momentum this year.

As part of the state's informed consent law, Vogel would like to require all women seeking an abortion to have an ultrasound, with the option of reviewing the images after the test.

"It's one thing to have information available, but if you have technology there and it's part of your clinical visit, it would seem that you would want to have the opportunity- or at least the right- to have the information about the ultrasound," said Vogel.

She pointed to the approximately 20 states across the country that have passed similar legislation, and continued, "I find it interesting that the majority of people actually believe that it's fair and that it's a good law."

Vogel is referring to a recent Mason-Dixon poll, commissioned by the conservative group, Family Foundation of Virginia, that found the majority of Virginians do support a required ultrasound.

According to the study, 54 percent of people back the law, 28 percent oppose it and 18 percent are undecided.

Interestingly, more women back the idea than men, with 57 percent of women lending their support compared to 50 percent of men.

Honke told CBS 6 she'd like to know a lot more details about the poll- such as how the question was phrased and how many people were interviewed- before she draws any conclusions about its validity.

As for Vogel's bill, SB 484, Honke called it a blatant "interference" between the doctor-patient relationship.

"A woman has already made the difficult decision to terminate the pregnancy, and so to offer her [an ultrasound] that she may or may not want to view, we believe is an interference with her personal, private decision," said Honke.

We asked Chris Freund with the Family Foundation Wednesday whether or not bills passed in other states have had any impact on abortion rates.

"Most of the legislation is brand new," said Freund, "and has only been on the books for a few years, so I'm not aware of any data showing a major impact."

Freund did note, however, that "statistically" fewer women choose to have an abortion after viewing an ultrasound.

Both Vogel and Freund contend that the bill makes sense since most women are receiving ultrasounds at abortion providers anyway, with no real added costs.

Vogel told CBS 6 that an evaluation from the state determined "there are no fiscal impacts" associated with her bill.

Honke says Planned Parenthood of Virginia does perform an ultrasound as part of its abortion services, but she cannot speak for other providers.