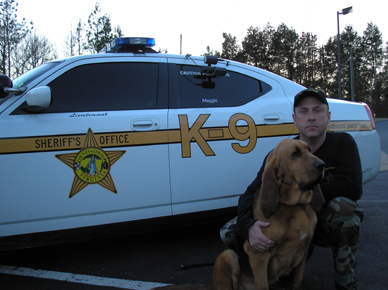 LOUISA COUNTY, Va. (WTVR) – A six-year veteran of the Louisa County Sheriff’s Office has died in the line of duty. Maggie the Bloodhound died after being attacked by another dog while responding to a call early Saturday morning.

The Louisa County Sheriff’s Office said they were responding to a call early Saturday that a suicidal man had slit his wrists and run into the woods with knives.  When deputies and Maggie were dispatched, Maggie was attacked by a pit bull and severely injured.

She died of those injuries this morning, Dec. 12.

Lt. Patrick Sheridan talked about losing Maggie and said that these animals serve the citizens of Virginia and give their lives to protect them.

In her career, Maggie had responded to 348 calls for service and assisted in investigations in multiple jurisdictions including Henrico, Spotsylvania, Orange County, and others.

She had also assisted Virginia State Police and the FBI.

The pit bull that attacked Maggie is now in the custody of Louisa County Animal Control.