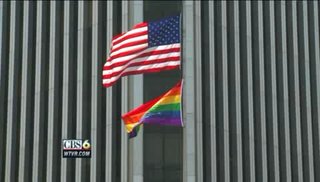 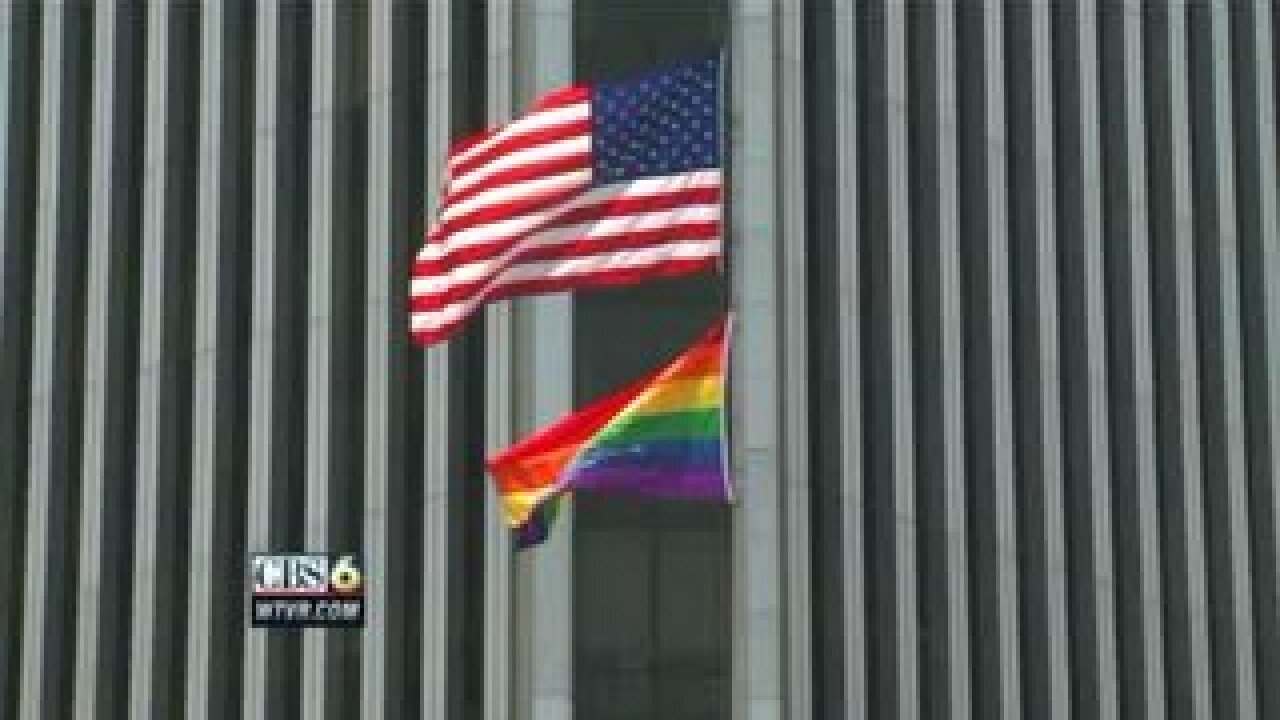 RICHMOND, Va. (WTVR) - The divisive diversity flag flap still flying high over the Federal Reserve of Richmond has gotten a lot of attention across the state and the country. The gay pride flag has been flying just below the US flag at the Reserve since the start of June, which is recognized as lesbian, gay, bisexual and transgender month.

Some casual observers might get the idea from the controversy that Richmond is closed-minded Southern burg heavy on the hate. But many gays and lesbians in the city have found it quite the opposite.

The pride flag is in character for the River City, they believe.

"Richmond is a really cool town because it has this really progressive, artsy undercurrent" said Kevin Clay, editor and publisher of the gayrva.com website. "Virginia as a whole gets that vibe that hey, we're in this conservative state. But Richmond, it's very progressive. It's very comfortable living here."

"Transitioning to Richmond has been a great experience," Barracks said. "I haven't faced any racism or any homophobia or anything like that here. I think it is a very accepting city."

For generations, gays and lesbians have played major roles in the growth and health of the city. There's a large population in the heart of the metro area. They were the first in some of the city's toughest neighborhoods suffering from white and black flight during the crack cocaine years, such as Jackson Ward and northern Church Hill. Those neighborhoods have since been largely reborn.

Generally, Richmond's gay and lesbian population has been a quiet, sure presence, not so much in-your-face, which is the way things are generally done in Richmond.

Tracy Thorne-Begland is the deputy commonwealth's attorney for Richmond. He and his partner are raising two children together. He's never hidden his sexuality, or gone out of his way to broadcast it, although he had a long fight with the military when he was a Navy fighter pilot kicked out for being gay.

"You know in the nearly 20 years that my partner and I have been here, I think we've thrived in the community and it's been a positive place to live and raise our family," Thorne-Begland said. "We've also thrived in our legal careers here in what you would think would be a fairly conservative environment. But it hasn't been an impediment. I've got to say, though, that having a state that is chock full of politicians who want to build their political resumes on the backs of gays and lesbians by advancing on piece of legislation after another that basically says we're second-class citizens sets a pretty hostile environment for people when they think about moving here. I think the Commonwealth misses out on a lot of people who could contribute to our society because of this background of discriminatory legislation."

Jerry Williams was the movie critic for CBS-6 and still critiques film and television, as well as being a writer/producer.

"I've been out since the mid-70s at work," Williams said. "Luckily everybody I've worked with has been intelligent and enlightened enough to have it not really be a problem. I was a single parent who co-parented since the '70s. It's never been an issue for me. So I haven't seen a lot of changes. One of the biggest changes I've seen was in 2006, when the state of Virginia decided I didn't deserve the equal rights of everybody else in the state and I couldn't get married."

He says the flag probably wouldn't have flown at the Federal Reserve ten years ago. "Things move slowly here . . . we will eventually get equal rights. I'll be able to marry the man I've lived with for 20 years."

Richmond hasn't been silent on homosexual rights over the decades.

"There's a long history of activism in Richmond from the 1970s" and earlier, said Cindy Bray, program director of the Gay Community Center of Richmond. "The Richmond Lesbian Feminists have been around since 1975 . . . "

She pointed out that some Richmond churches have taken strong, consistent stands over the years with gays and lesbians. A gay student group at Virginia Commonwealth University successfully sued for equal recognition about 35 years ago, Bray added.

What has been the breakdown, more for, or more against?

"From what we've been able to tell, pretty evenly divided," Strader said.

The idea for flying the pride flag came from a gay and lesbian employee group called Prism, he said. It's one of several employee groups, including ones for Asian-Americans, one for those with disabilities and a cross-generational group.

Strader said they've been checking to see if other flags have flown at the Reserve. There have been reports, he said, that the Red Cross flag flew one time after a disaster and the United Way flag may also have flown at one point.

He said there's no plan to fly any other flags at this point.