"Their ballot will be counted." 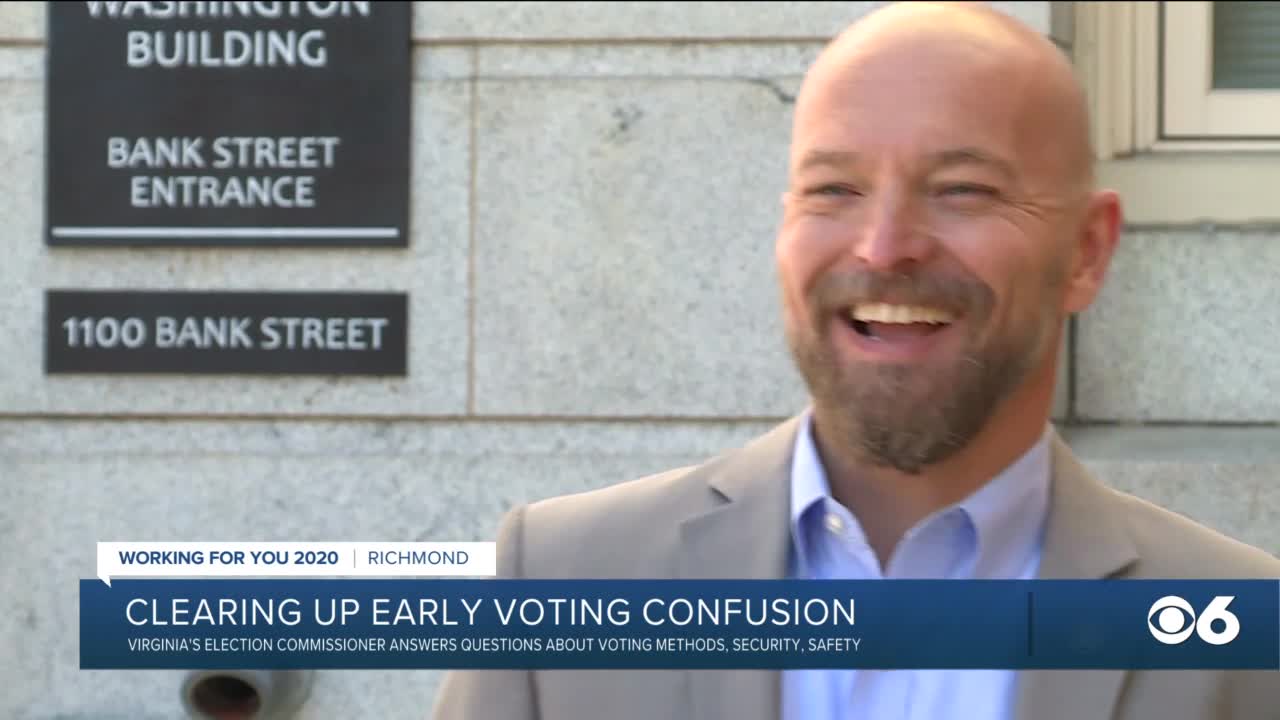 RICHMOND, Va. -- Virginia is seeing unprecedented interest in absentee and early voting because of changes to state election law and the coronavirus pandemic.

Virginia’s election chief said, like his counterparts across the country, 2020 is the “toughest” election of his career because of the adjustments they had to make, but feels very confident in the processes put in place.

Christopher Piper, the Commissioner of the Virginia Department of Elections, said on Friday and Saturday, which were the first two days of early, no-excuse voting, 36,000 Virginians cast ballots in-person statewide.

Piper laughed when asked how he was sleeping these days in the age of COVID-19 and modern politics.

“You know what I do a lot of running, get up super early in the morning, and I meditate a lot,” Piper said. “It’s just non-stop, constant.”

The crush of voters trying to cast ballots prior to Election Day has lead to long lines at registrar’s offices in Virginia and confusion for some voters about the correct process to follow.

“The confusion arises because so many people are used to going in-person, on Election Day. Obviously, that’s not the most viable option for our voters this year. We want to assure them and reassure them that the process is the same on the back end: that their ballot will be counted,” Piper said.

For the first time this election, Virginia voters can cast their ballot before Election Day without having to provide an excuse.

During business hours during the week and certain weekends, registered voters can show up to their local registrar’s office or a satellite location established by cities and counties with a proper form of identification and vote.

Mail-in absentee ballots are available by applying, either online or at your local registrar’s office. Those ballots can be mailed back or dropped off in-person at locations set up by local registrars. Check with your city or county to find those locations.

President Trump and some lawmakers have voiced concern about the security of mail-in voting and drop-off locations, arguing it opens the vote up to the possibility of tampering.

“When they start processing those, those have to be witnessed by election officers and one from each party. This is a public process that sees its way through the system,” Piper said. “The biggest security factor that we have in Virginia is we all vote on paper. So at the end of the day, when there is any question about it, we can always go back to the paper and count from there.”

Election officials nationally have said it is a distinct possibility that a winner of the presidential election will not be clear election night. Counting the record volume of absentee ballots could lead to delayed results, some states taking days or weeks to establish a clear winner.

Piper said Virginia’s results will continue to come in after Election Day because mail-in ballots postmarked by Election Day can arrive up until 12pm on the Friday following Election Day. Still, Virginia law allows election officials to pre-process absentee ballots received prior to Election Day.

“You take the ballots, you open them up, they’re run them through the machine, but that whole process is observed by election officers, one from each party. It’s a very secure process we can follow,” Piper said. “The main thing that means in Virginia, on election night, a lot of the ballot that have already come in these last few weeks before the election will have been processed through. So we won’t be like in some states, they won’t be done for days or weeks.”

For more information on how to vote early where you live, check out our CBS 6 Voter Guide.