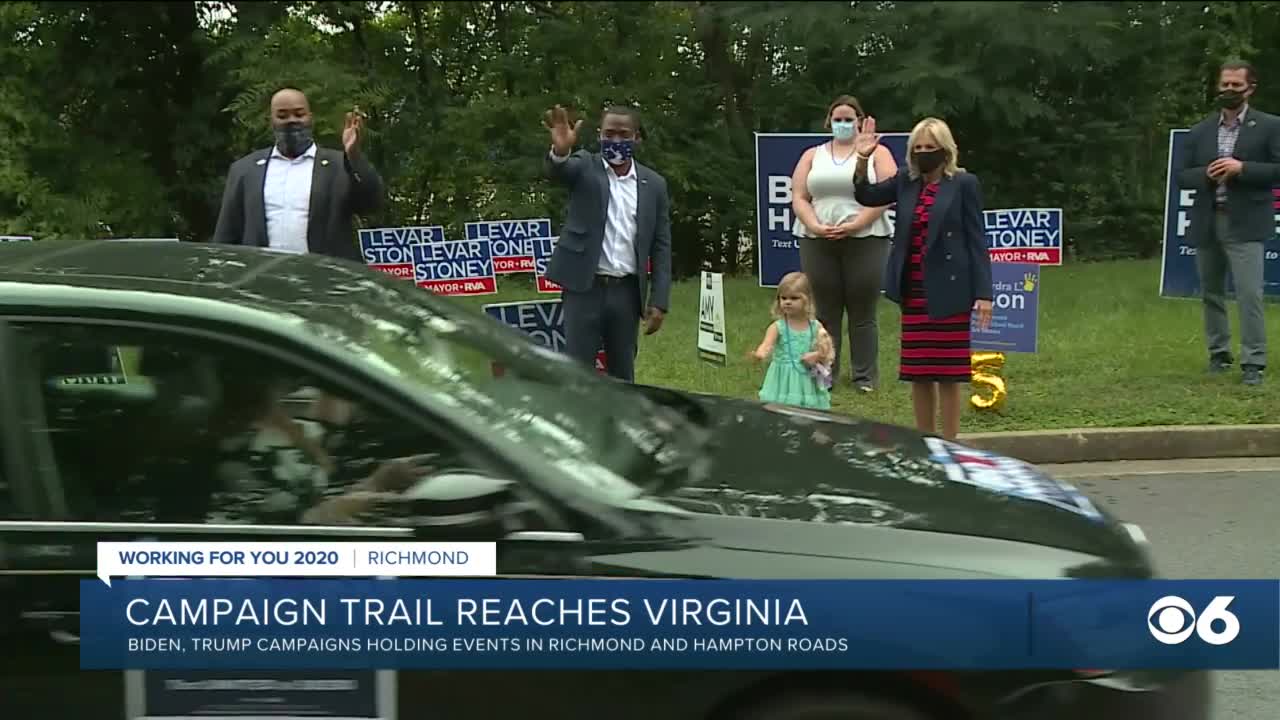 Dr. Jill Biden was in Virginia on Thursday to campaign on behalf of her husband Democratic presidential candidate and former vice president Joe Biden.

RICHMOND, Va. -- Dr. Jill Biden was in Virginia on Thursday to campaign on behalf of her husband Democratic presidential candidate and former vice president Joe Biden.

Biden, according to a Wason Center poll released this week, had a 48% - 43% lead over President Donald Trump among likely Virginia voters. Previous polls showed Biden with a double-digit lead over Trump.

Trump is scheduled to speak to Virginia voters at a campaign event in Newport News on Friday night.

On Thursday, Jill Biden greeted a convoy of voters who decked their cars out with Biden signs. She was joined by Richmond Mayor Levar Stoney, State Delegate Lamont Bagby, and campaign volunteers.

It was her third stop in Virginia on Thursday, earlier meeting with Black educators and military families in Hampton Roads.

Biden said her husband was not taking any state for granted and encouraged people to take part in early voting.

"I know that this sounds trite but, this is the most important election of anyone’s lifetime. And the election is really taking place right now," she said.

The Virginia Department of Elections said as of Thursday afternoon, more than 131,000 people have voted early so far this year while more than 915,000 voters have requested an absentee ballot.

Republican state leaders said President Trump was visiting Newport News to reach voters in both Virginia and North Carolina. They added they saw Virginia as being "in play" for Republicans.

Key Dates and Deadlines in Virginia

Register to Vote in Virginia Check Your Voter Registration Status Find Your Polling Location What form of ID do I need to bring with me?
View Full Election Guide
Copyright 2020 Scripps Media, Inc. All rights reserved. This material may not be published, broadcast, rewritten, or redistributed.