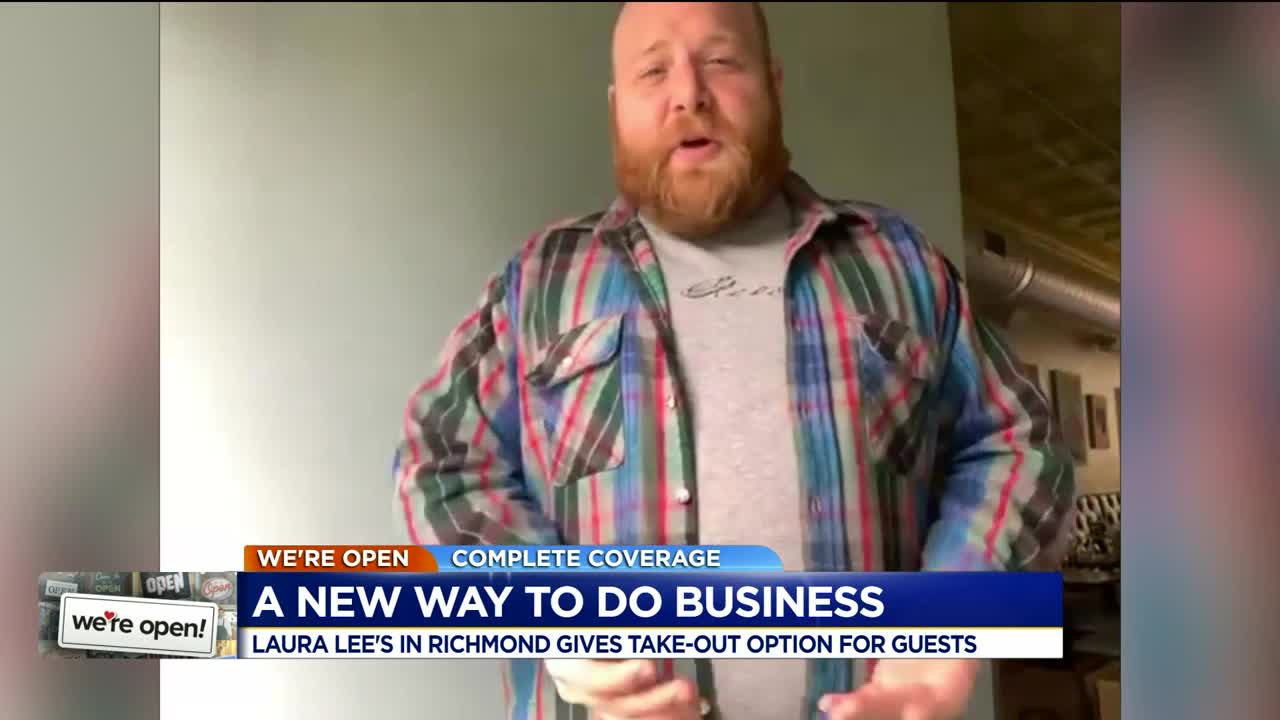 RICHMOND, Va. -- While some small businesses around Richmond have closed due to COVID-19 restrictions, others have been able to remain open -- albeit with some changes. CBS 6 created a "We're Open" segment to shine a light on small businesses in an effort to support business owners and their workforces.

Michael Smith is the general manager of Laura Lee's, a locally-owned restaurant, on Semmes Avenue in South Richmond.

In an interview with Eat It, Virginia! co-host Scott Wise, Smith discussed the shock of current events and how he and his staff have adapted to survive the new normal. A lightly-edited version of their conversation is transcribed below:

So Michael, obviously, we're living in interesting times. Tell me about the initial shock, and then how you guys pivoted very quickly.

Yeah, well, I guess like, we're still kind of in shock, to be perfectly honest.
I don't think I've been able to fully understand exactly what has happened in the last two weeks.

I mean, I don't even know when to even begin.

When we even started to think about this as being a problem. You know, clearly by the 13th, which is that like Friday, before we closed, we knew we had to make a decision.
We had to accept.
It was on everyone's lips. It wasn't just something that we were talking about.

So to answer your question, you know, we really started having serious conversations about it the Thursday service before the weekend that we closed.

And it really came down to what steps are we going to take to keep everyone happy, de-stressed, clean and not just our people coming in, but our staff.

We were really monitoring the mental and physical health of our staff, because that's just as important when you're running a business as the people who are coming into the doors, you know, if not more important.

And so by the end of what was a busy weekend for us, we realized that we had to shut the doors in order for people to take this seriously. People were still ignorant to the facts of what was happening in the world.

And it was just strange to have to offer somebody a service that is, you know, hospitality, but like, from a distance. Those two things, just don't blend.

So, we all sat down at the table after Sunday brunch service and threw out every single possible scenario that could be there.

And when we said, what if we were to just close, that's when it kind of sunk with us. It was actually the first little piece of relief, in a weird way, that I was able to feel that whole weekend because it was a decision that we could all stand behind, which was the weirdest decision to have to come to terms with because we're in this industry to work, we're not in this industry to give up or to like shut down or close.

It was just such a strange relief. Followed by this immense, gut-wrenching depression.

I don't know how to describe it. We closed up shop, came in the next day and cleared everything out of our fridges and asked the staff to come in and take food home.

The day after we closed was the weirdest feeling I've ever had in my entire life.

You know, I'm closing the doors behind me and not knowing when we're coming back, you know, a lot of other restaurants at that point, were already rolling out takeout menus. So we knew that that was a possibility. But we knew that for our own sanity, we needed to take at least a couple days off to let all of this sink in and let the shock sort of take hold.

And it's really been a grieving process ever since. I wake up every morning and I'm not sure how I'm going to be feeling.

I mean, even on the ride into work today, I was having doom and gloom thoughts, which I just can't, I can't control you know, they're like, I, I don't even know there's no... I'm speechless. There's no words.

I was gonna ask you, how are you feeling? How are you doing today?

Well, thank you for asking. I'm really happy now that I have a sense of purpose. You know, we decided last Friday to open up on Saturday for our first night of takeout. And we knew that our neighbors really wanted us to have takeout options available.

We got so many messages, right when we closed our doors on Sunday the 15th. We got so many people sending us messages both texting me personally, but also on our Instagram, just supporting our decision and basically saying like when you what we can do to help you, you know, will you guys open up for takeout?

We want to be able to support you for takeout.

So we knew that that was a possibility.

And we finally settled on it and coming into work that day, the first day we did take out I was not sure how it was going to go. I wasn't sure how I felt about necessarily like being in that kind of situation.

However, everybody who came in that day, which were a ton of people, were respectful of each other's distancing. Everybody stayed apart. People waited to come in the front door, you know, people were bringing their own wipes to open up the door handle.

And so, seeing how the community was like working together to make this work, alleviated a lot of my stress. I was worried that I might have to kind of like tell people to distance themselves, like I didn't know, how many people we'd be dealing with. And if I was going to have to be like, controlling a line like that, there was something I've never had to stress about.

But fortunately, the public and everybody in this neighborhood understands exactly the situation and is, you know, being really, really cool about it.

We've been able to trigger online ordering, so we've kept it really a contactless.

Again, it's really weird to be talking about something in the hospitality industry that doesn't involve coming into contact with people, like, I very much want to hug everybody here.

Not today, Michael. Not today.

But we have it down really quick and simple, so people don't even have to come into the restaurant and there's no exchanging of money. Your bag is over there with your name on it, grab it, and go. It's that simple and efficient.

So let's talk about that for a second. What exactly is Laura Lee's offering? And what what would you tell the people of Richmond who are looking to support small business?

We are offering just a couple items right now just to, you know, give people some food. We didn't want to staff a full kitchen full of food because we didn't know if the government would shut us down within a couple days if we were to go under some sort of mandatory shut down.

So we're playing it one day at a time, keeping our double cheeseburger as the foundation of our entire restaurant now. That will always be on our menu.

SOLD OUT!It’s Takeout Burger night! With wine and beer to go! #rvatakeout accepting orders online or by phone starting at 2 pm til 8 pm. Just go to our website to order or call us at (804) 233-9672 #rvatakeout

We right now are doing a vegan kind of chickpeas and rice bowl that's curried with pickles and chimichurri.

We also have our pasta bolognese tonight. So we're keeping our menu limited to about three savory entrees, a couple of desserts. And then because Virginia allowed us to serve wine and beer without having an off-premise license. We're able to sell that online as well, which is really, really nice.

Alright, two more questions, then I'll let you run. How many employees did you employ before this and what are you guys looking like now?

We're trying to run this operation with no more than four people every night.

And since we've been open for takeout, we've had a total of nine individuals working.

How do people order? Where do they go to to find you?

If you have any trouble ordering, you can always just pick up your phone and we're here to answer the phones. But we are pushing everybody to online ordering because of the contactless nature.

So everybody can go online and when they order they can put in their credit card information. They can leave it gratuity. And I should mention that people have been incredibly generous with their gratuities, which is something that we really, really appreciate here.

I don't know if this is going too far, but we have realized that this is affecting not only obviously the servers, but it's affecting the kitchen staff as well. And so we're doing a tip pool on every tip that is given from our guests as part of the takeout order is shared with everyone, regardless of their job on the staff. So we're all in this together.

We're not going anywhere. We've been so overwhelmed with the support that we've gotten the first few nights we did this on Saturday and Sunday, we sold out, we could not keep up with the influx of orders that we sold out of all of our food.

So now we're challenging everyone, like sell us out every night. We haven't really firmed up our hours because we're sort of playing every day one day at a time. But sort of the structure we've been doing. So far as you know, we start ordering around 2 p.m. and we'll serve dinner until 8 p.m.

Thank you, Michael, we love you very much. 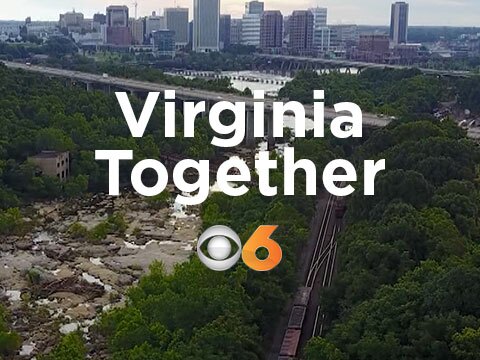