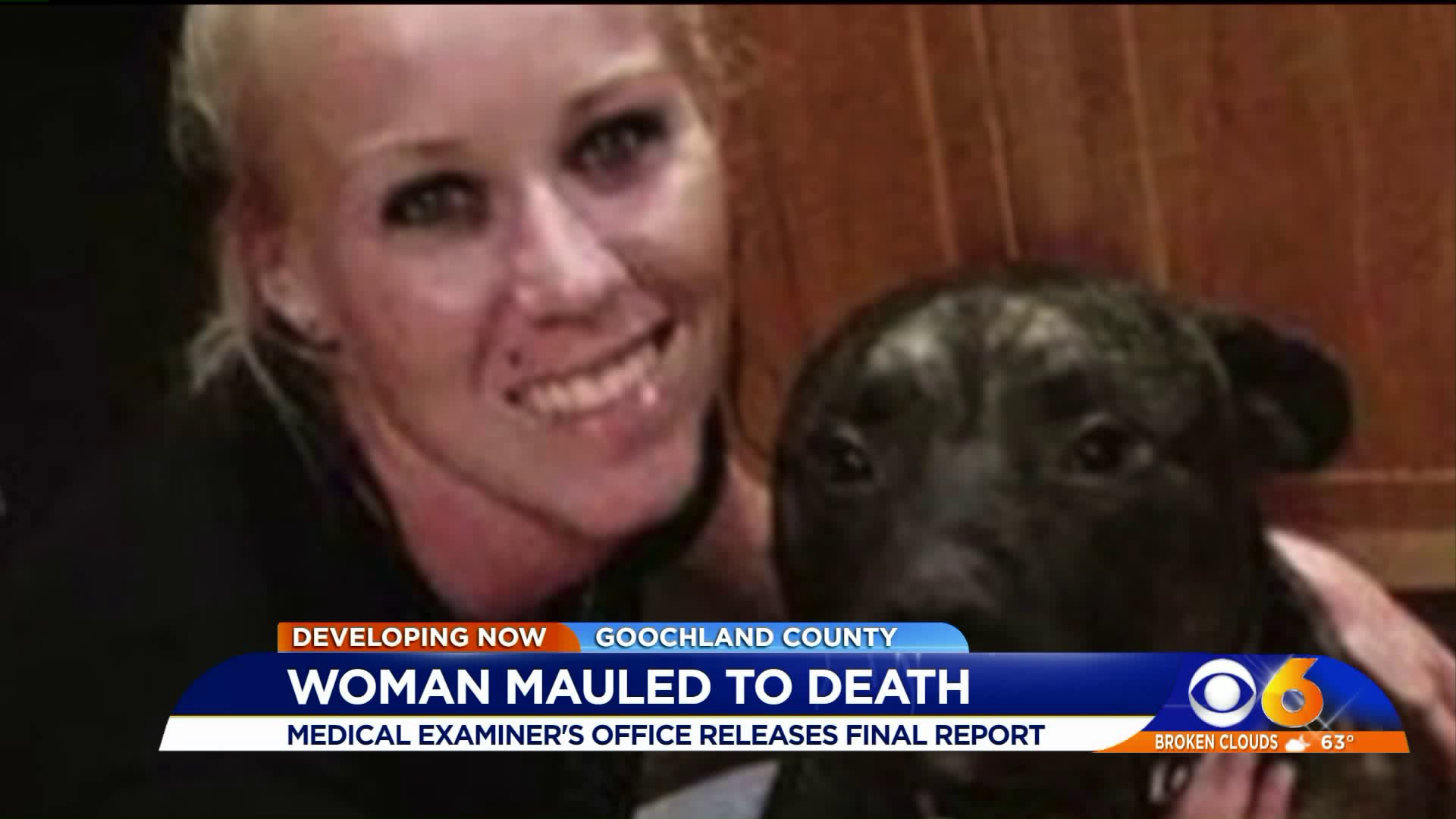 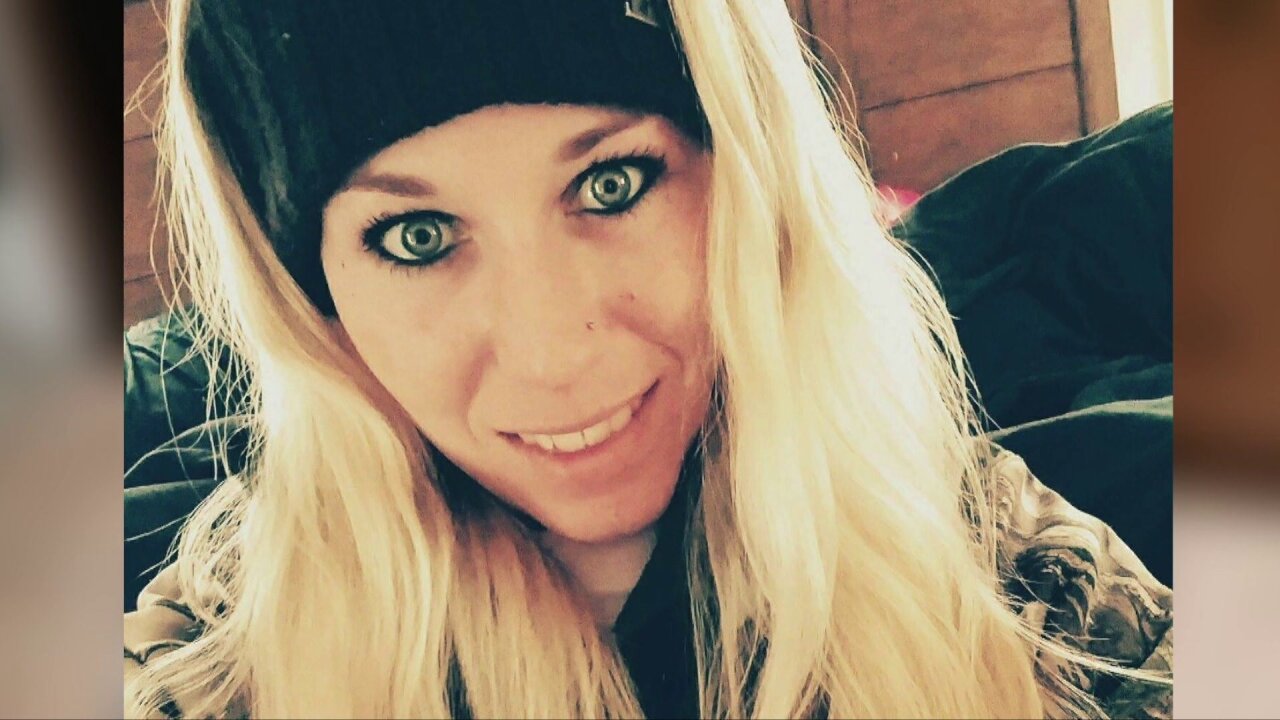 GOOCHLAND COUNTY, Va. – The medical examiner’s report states that Bethany Stephens, a 22-year-old Glen Allen woman, died accidentally and that the cause of death was due to mauling by animals. Stephens was found in the woods off Manakin Road the night of Dec. 14, with her two dogs nearby.

The final summary, released Tuesday, said that the injuries involved the head, neck, torso and extremities. These injuries were consistent with injuries associated with animal bite and claw marks. Many of the wounds were associated with skin and soft tissue hemorrhage consistent with antemortem trauma. There was extensive postmortem animal predation at the face, torso and arms.

The drug testing on Stephens was negative for ethanol and drugs of abuse, barbiturates and benzodiazepines.

The medical examiner first observed in December that Stephens appeared to die from a violent attack initiated by her dogs, Tonka and Pacman. The later summary made by the examiner used language which said "mauling by an animal or animals, possibly dogs."

“He didn’t say definitively that these dogs did it, but it’s pretty clear to us that’s what happened,” said Goochland County Sheriff James Agnew. “The ME never is going to say specifically that a certain animal did something but he did say it was consistent with animal maulings, specifically dogs.”

Stephens had defensive wounds on her hands and arms from trying to keep the dogs away from her, the examiner said in December.  It appeared the first traumatic injury was to the face and throat. Most likely, according to the initial report, Stephens was taken to the ground, lost consciousness, and then mauled to death.

Bethany with one of her dogs

There were no strangulation marks, but there were puncture wounds to the skull in keeping with animal bites. Stephens was not raped, and this was not a homicide, the medical examiner said in December.

Goochland County Sheriff James Agnew, who previously released photos and details of the grisly discovery to journalists, said that deputies witnessed the animals eating at Stephens’ rib cage. According to the report, the animals would not allow anyone within 20-feet of Stephens when she was found in the woods. The two brindled American pit bull terrier brothers, of the same litter,  were euthanized as a safety precaution to the community, the sheriff previously said, and with the family's consent.

Samples taken from the two and a half year old dogs were tested multiple times.

The Virginia Department of Agriculture was unable to definitively confirm the reported history that the two submitted dogs ingested human tissues.

“They had told us ahead of time that it would be unlikely that there would be any tissue or clothing or anything of that sort,” said Sheriff Agnew. “Dogs pass things through their intestinal very quickly. It had been well over two days from the time they were euthanized.”

According to that report, variably sized hairs/fur was observed in the provided samples of feces, and feces within Pacman. Some of the hairs/fur are long and often wavy which is more consistent with human hair than animal fur.

The Department of Forensic Science, utilized the same samples, along with a DNA profile of Stephens, and determined that blood and human DNA was found on swabs taken from Tonka’s chest. Tonka had no external wounds but did have blood on the chest and a leg.

Pacman also had no external wounds but had bloody fluid around the mouth. The collars worn by both dogs were covered on all sides by blood.

Testing done on Pacman’s collar revealed human DNA. The chances of the DNA from either sample belonging to anyone other than someone related to Bethany Stephens is highly unlikely, according to statistical data presented in the report.

“I think the fact that we found DNA human, DNA that was later matched up with a one and 7.2 billion odds of it being someone other than Bethany Stephens on the dog... I think the scientific evidence supports what we have been saying all along,” said Sheriff Agnew.

“I really don’t know why the dogs did what they did. I can tell you from my own observation in spite of the fact, I heard from folks that they were loving that would kiss you to death, they were aggressive dogs that were threatening,” Agnew added.

A rabies test was negative on both animals.

Background info on the dogs

Though the dogs were both born in April 2015, Stephens first adopted Tonka as a puppy. Tonka was neutered and chipped. About a year later she adopted Pacman, after he was handed off between other owners; several times in a short period.

Pacman was not neutered, and his first owner said she gave him to a friend after he snapped at her while pregnant. That friend lost his home so he gave him to another friend.

The dog eventually ended up back with the first woman at which time she noticed wounds on his neck that indicated signs of abuse. She then put him up for adoption and Stephens rehomed him, though she was warned that he was abused and known to snap.

The sheriff said friends said Stephens thought she could work with him. Her dad said he also warned her that Pacman was "dangerous."

Authorities ruled out foul play and had CAT scans and X-rays done prior to the autopsy, to rule out homicide. There were no broken bones or signs of strangulation and there were no signs of sexual assault.

For many, despite the facts that overwhelmingly led law enforcement to the conclusion that Stephens was in fact, mauled to death by her dogs, the gap between pets and killers is difficult to comprehend.

Certified master dog trainer Valerie Paul did not know Stephens, Pacman, or Tonka, but has testified in multiple court cases and has been deemed an expert by the court system.

She offered some potential answers as to how and why the dogs allegedly went from adoring their owner to feeding on her body.

“Most dogs aren’t going to just turn on an owner,” Paul said. “As more and more details come out, I think there probably was some sort of outside influence, but not necessarily another animal or anything like that – just something that could have enticed the dogs to get overexcited and react the way dogs will.”

"The fact that they are pit bulls doesn’t connect to what they did, it is a dog thing," said Paul. She said at the end of the day, dogs are animals, and in extreme circumstances, they can potentially view even their owners as threats or food sources.

"That’s actually very normal, dogs view people very differently than how we view people, when we see a body, we think of our loved ones and all of the memories that they bring to us, dogs don’t, in general."

Sergeant Mike Blackwood explained that the dogs were a “little bit neglected towards the end of this.”

They went from being inside dogs doted on by Stephens to living outside in a kennel. Stephens left the dogs with her father, and Blackwood said; “he wasn’t taking care of them – it wasn’t his responsibility.”

Friends explained that Stephens was going through certain personal events and she no longer had the dogs with her.

The weather changed, and the dogs lived out "in the cold" and were not fed daily. Blackwood said that with Stephens coming home maybe five times a week, the dogs became more isolated and only had contact with each other.

Extreme lifestyle changes can have an effect on animals

She pointed out that resource guarding, or getting hyped up could quickly turn into a negative energy – especially from dogs who had been cooped up.

“Someone getting involved, if done improperly, could get bitten,” Paul said.

No one can say for certain what exactly happened that afternoon.

"There is a lot of speculation…,” Paul said, “…but you can’t blame the breed.”

She said that pit bulls are actually very sweet and are good family dogs when given what they need.

“If you have concerns, talk to a trainer,” Paul added. “There were factors to this.”